Armenia, Azerbaijan and Russia signed an agreement on Tuesday to end six weeks of fierce fighting in Nagorno-Karabakh in a deal Armenian Prime Minister Nikol Pashinyan described as “unspeakably painful” in an emotional Facebook post.

Under the deal, Azerbaijan will hold on to areas of Nagorno-Karabakh that it took during the conflict. Armenia has also agreed to withdraw from several other adjacent areas over the next few weeks.

During a televised online address, Russian President Vladimir Putin said that Russian peacekeepers would be deployed to patrol the front lines. The country’s defense ministry confirmed that 1,960 personnel would be involved, state news agency Tass reports.

Turkey will also take part in the peacekeeping process, according to Azeri President Ilham Aliyev, who joined President Putin during the address.

Describing the decision as “unspeakably painful for me personally and for our people”, Pashinyan said the agreement followed “an in-depth analysis of the military situation” that has seen Azeri forces closing in on Stepanakert, the region’s main city.

He said the agreement was “the best possible solution to the current situation”. 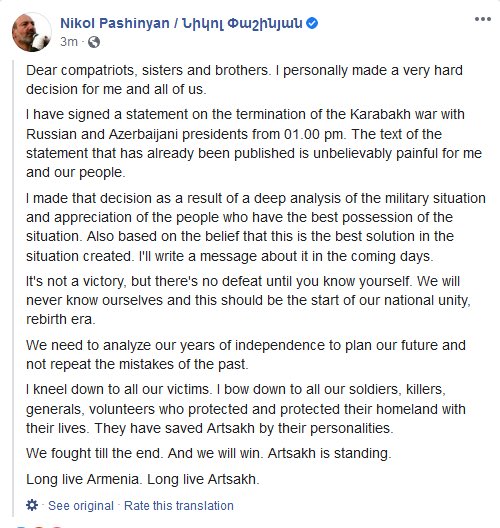 The Armenian leader in Nagorno-Karabakh, Arayik Harutyunyan, said he gave his agreement “to end the war as soon as possible”.

In the Armenian capital Yerevan, a large crowd has gathered to protest against the agreement. They broke into Parliament and other government buildings, shouting “We will not give up.”