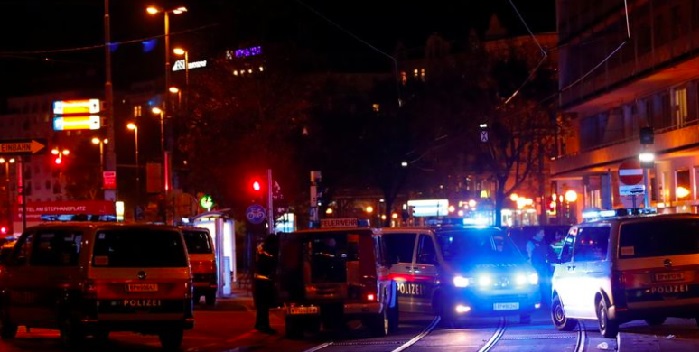 Austrian police are searching for at least one suspect after a multiple gun attack in the capital, Vienna which left five people dead.

About a dozen other people have been wounded – some seriously – after gunmen opened fire at six different locations in the city center on Monday evening.

One suspect was shot dead by police, officials said. The Vienna police state in a Twitter post after the shootings that one of the seriously injured individuals was a police officer.

Austrian Chancellor Sebastian Kurz said the shootings in Vienna late on Monday were a”repulsive terror attack”, adding that the Army would protect sites in the capital so the police could focus on anti-terror operations.

“We are currently experiencing difficult hours in our republic. I would like to thank all the emergency forces who are risking their lives for our safety, especially today. Our police will take decisive action against the perpetrators of this repulsive terrorist attack,” Kurz wrote on Twitter.

Addressing a news conference, he said the attacker was an Islamic State (IS) sympathizer and that the suspect’s home had been searched and video material seized. Police tweeted that he had been wearing a fake explosive belt.