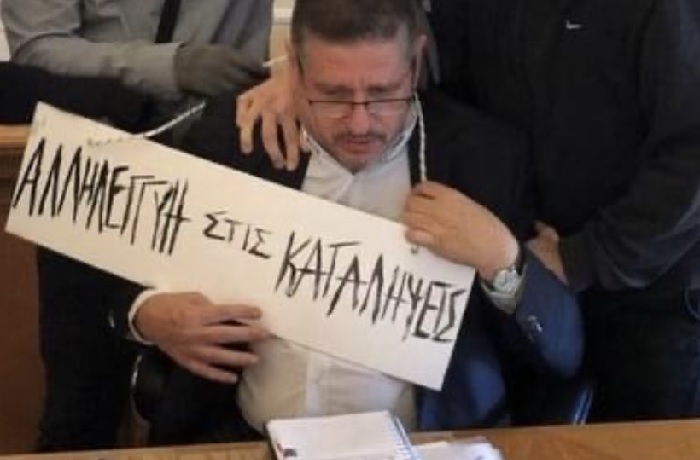 Greece’s Ministry of Citizen Protection has announced a 100.000 euro reward against members of the anarchist group “Fighting Solidarity Initiative” who assaulted the Rector of the Athens University of Economics and Business in his office on Thursday.
A group of anarchists entered the Rector’s office and abused and humiliated him, then put around his neck a placard reading “Solidarity with Squats”. Then they proceeded to vandalize his office and spray painting anarchist signs.
The picture of the Rector, who was clearly humiliated and terrorized was posted on an anarchist website. The image caused outrage in Greece, with citizens complaining about the continuous acts of violence and vandalism by anarchist and leftist groups in Greek universities.
The announcement of the Ministry of Citizen Protection reads:
By today’s Joint Ministerial Decision of the Minister of Citizen Protection Mr. Michalis Chrysochoidis and the Deputy Minister of Finance Mr. Theodoros Skylakakis, a monetary reward of one hundred thousand (100,000) euros is announced to anyone who provides information to a competent Authority for the preliminary investigation by the Athens Prosecutor’s Office, for crimes and misdemeanors committed by members of the “Fighting Solidarity Initiative” organization on 29-10-2020 in the office of the Rector of the Athens University of Economics and Business.
We invite any citizen who knows anything related to the case to call the Attica Police Directorate at 210-6476243 and 210-6411111.
It is noted that we will secure the anonymity of the persons who will provide any information.
Chrysochoidis issued the following statement:
“Greece is shuddering. For the abuse of a rector and the posting of a photo, which shows him head down with a sign like a noose, with the abuse of the word solidarity. Signs were hung by Hitler’s followers on Jews and insurgents. Democratic people are getting indignant The time has come for those who tolerate such acts to reconsider and get angry. The perpetrators are now wanted. The answer is one and only. As with Golden Dawn, fascism will not pass.”
All political parties denounced the act of the anarchist group and ask for their arrest and punishment.