By Tasos Kokkinidis
October 28, 2020
Facebook
Twitter
WhatsApp
Linkedin
Email
A Greek Air Force pilot, flying with his F-16 on Wednesday morning, sent a message to all Greeks for the celebration of the 28th of October.
“Greeks, from Orestiada to Gavdos and from Othonoi to Kastellorizo, remember that the most laconic and resounding message in world history consists of two syllables: OXI.
“A message that reminds everyone that Democracy and Freedom are ideals that will triumph as long as there are immortal Greek souls. Souls bold beyond their strengths, adventurous in their knowledge and optimistic despite difficulties. Happy National Day Greece,” the pilot said.

Greece marks the 80th anniversary of the heroic OXI Day without the annual military parade which traditionally takes place in Thessaloniki, due to the coronavirus pandemic.
As cases of the virus skyrocketed over recent weeks, all mass events to commemorate the thousands of Greeks who gave their lives for freedom in 1940, have been cancelled, including the school parades that took place on October 27 in every corner of the country.
On Tuesday evening, the Municipality of Athens illuminated the Omonia Square fountain in blue and white to commemorate October 28, 1940, OXI Day. 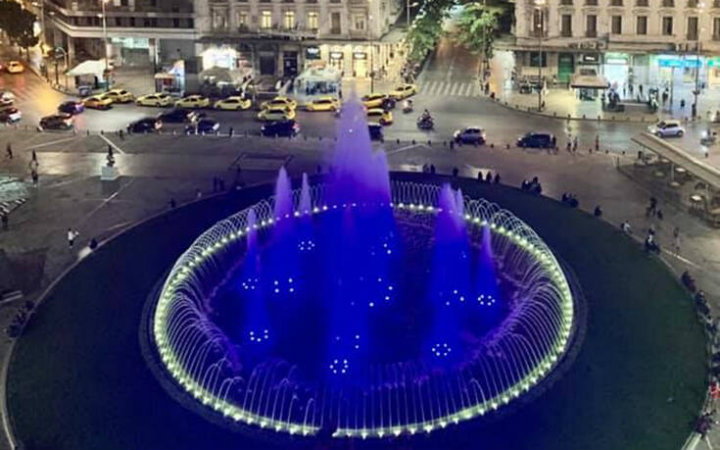 The Mayor of Athens, Kostas Bakoyannis, posted a photo and a video on his social media of the illuminated fountain.
“In the colours of Greece”, he wrote.