GRNews
GreekReporter.comGreeceAlmost 6 Out of 10 Young Greek Citizens Live with Parents

Almost 6 Out of 10 Young Greek Citizens Live with Parents

By Tasos Kokkinidis
September 7, 2020
Facebook
Twitter
WhatsApp
Linkedin
Email
Recent data released by the European Statistical Agency, Eurostat, show that almost 6 out of 10 Greeks aged 25-34 lived with their parents in 2019.
Greece is only behind Croatia on the corresponding chart among 30 European countries. The average ratio of young people still living at home in the EU is around 30 percent. As expected, Scandinavian countries have fewer young adults who still live with their parents. 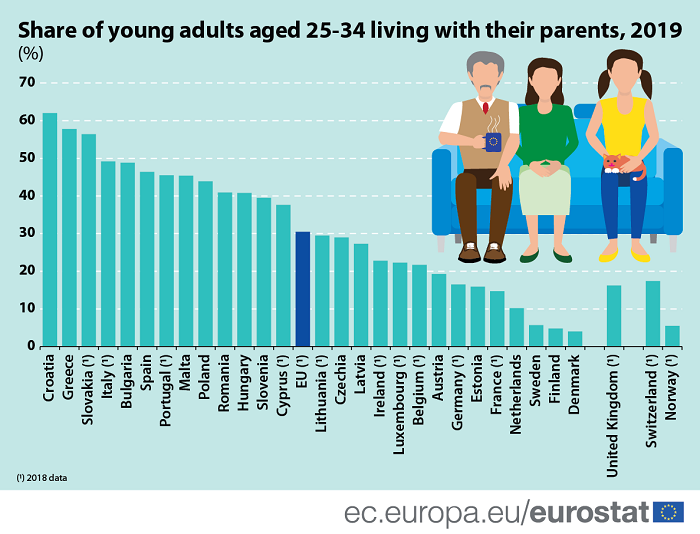 Strong family ties, along with huge youth unemployment and rocketing rental costs in Greece, most likely account much for this phenomenon.
The family unit is the most important foundation of Greek society, providing emotional and economic support to the individual. Greek families, along with those from the rest of Europe, have generally become smaller in size over the past few decades as the fertility rate has declined.
Nevertheless, relationships remain extremely close. The social life of most Greeks deeply involves their relatives, and the extended family always plays a strong role in one’s life.
The jobless rate in Greece increased from 15.7 percent in April 2020 to 17 percent in May, according to the latest data released by Eurostat, released in May. The hardest hit cohort of people were those under 25, with their unemployment rate reaching 37.5 percent in May, against 32.6 percent in April.
This, coupled with escalating rental costs, is forcing the majority of Greek young people to remain living at home.
Across the EU, young men are more likely to live in their parents’ home than young women. Additionally young adults in the Nordic countries typically move out the earliest, while their Southern and Eastern European peers move out the latest.