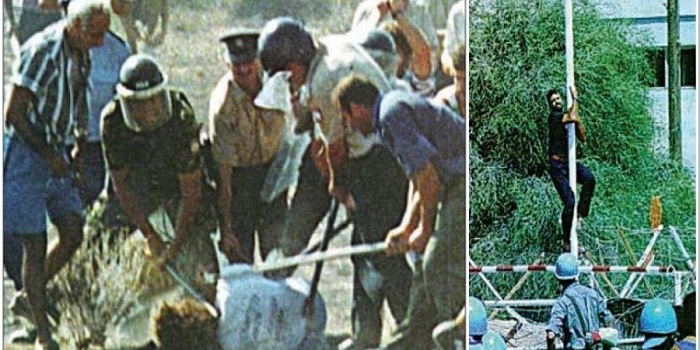 Cyprus is marking this week the brutal murders of Tasos Isaak and Solomos Solomou, the cousins who were murdered by Turkish mobs and police in August of 1996 in Deryneia.
Anastasios “Tasos” Isaak was a Greek Cypriot refugee who participated in an August 11, 1996 civilian demonstration in Deryneia against Turkey’s military occupation of the island.
During a confrontation in the UN buffer zone between the demonstrators and individuals from the Turkish “Grey Wolves” group, Isaak suddenly found himself ensnared in barbed wire. None of his fellow protesters had noticed that he had been left behind the main group.

Soon, a large group of Grey Wolves ran toward Isaak and attacked him. Unchallenged by the nearby UN peacekeepers, the Turkish officers continued brutally beating the protestor for several minutes.
By the time Greek Cypriots, aided by the UN peacekeepers, managed to drag Isaak away from the mob, he was dead. According to video footage which captured the attack, a number of Turkish Cypriot policemen were also seen beating him viciously.
Solomos Solomou was murdered just a few days later, on August 14, in the aftermath of the funeral of Tasos Isaak.
Solomou, Isaak’s second cousin, was shot and killed in cold blood by a Turkish officer while trying to climb a flagpole in order to remove a Turkish flag flying there in Cyprus’ United Nations Buffer Zone.


The entire horrific scene was recorded by nearby journalists and was broadcast live on television at the time.
Solomou’s funeral, held on August 16 in Paralimni, was attended by thousands of people and it was commemorated as an official day of mourning on Cyprus.