Greece Issues Commemorative €2 Coin for Anniversary of Battle of Thermopylae 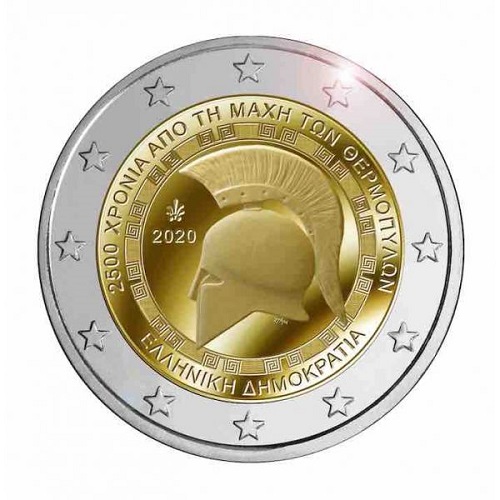 Greece has issued a silver commemorative €2 coin for the anniversary of the Battle of Thermopylae, which took place on August 9, 480 BC.
The coin will be an entry in the 50th annual World Money Fair in Berlin, to be held from January 29-31, 2021.
The Battle of Thermopylae is one of the most important and well-known battles in world history. The strategy and tactics of the fight are still taught in a number of military schools around the world. The Greeks, heavily outnumbered, lost on the field and the victorious Persians advanced through Greece to Salamis.
In reality, however, Thermopylae inspired all succeeding generations of Greeks with the example of Leonidas’ few, courageous men fighting valiantly against Xerxes’ Persian Army and serves as an example of heroism of free men defending their homeland and freedom.
Most of all, from a moral point of view, it is a shining example of self-denial, self-sacrifice and devotion to the homeland. The battle showed the advantages of the Spartans’ military training, the best weapons and the clever use of terrain.
It also serves as an example of great military leadership, as Leonidas inspired his soldiers to fight bravely, even though each one of the 300 heroic Spartans knew that it was certain they would die.