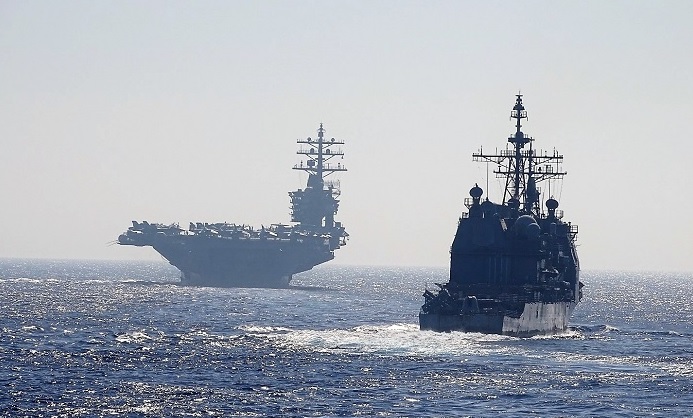 The Dwight D. Eisenhower (IKE) Carrier Strike Group (CSG) participated in surface exercises with the Hellenic Navy in the Mediterranean Sea, from July 24-28, 2020.
The exercises included formation steaming, tactical maneuvers, and communications drills, and allowed the participating forces to test and refine command and control between the two Navies.
“Exercises like this enhance our professional relationships and improve overall coordination with allies and partner militaries during times of crisis,” said Capt. Zoah Scheneman, commander, Destroyer Squadron 26.
“This opportunity flexed our ability to be postured with our NATO partners to be ready with credible force to assure, deter, and defend our interests in an increasingly complex security environment,” he stated.

The Hellenic Navy frigate HN Aegean (FFGH 460) was assigned as an air defense unit, locating and identifying air contacts around the CSG and serving as a horizon reference unit for the CSG’s aircraft as they landed. As a helicopter aircraft control unit, the ship checked aircraft in and out of the carrier’s air space.

“The Hellenic Navy has outstanding naval capabilities,” said Capt. Edward Crossman, commanding officer of Ticonderoga-class guided-missile cruiser USS San Jacinto (CG 56).
“We look forward to any chance to work with them as an opportunity to learn and fine-tune our tactics and procedures. It’s an absolute win for San Jacinto’s ‘Gunslingers’ to operate with our NATO partners. This training makes us stronger as an allied force, dedicated to maintaining regional stability, and sustaining freedom of the seas.”
Participating units were Nimitz-class aircraft carrier USS Dwight D. Eisenhower (CVN 69), San Jacinto, the Arleigh Burke-class guided-missile destroyer USS Truxtun (DDG 103), and the Aegean.
The Dwight D. Eisenhower Carrier Strike Group is conducting operations in the U.S. Sixth fleet area of operations in support of U.S. national security interests in Europe and Africa.