Stunning Photo of Comet Streaking Through Sky Over Greek Gorge 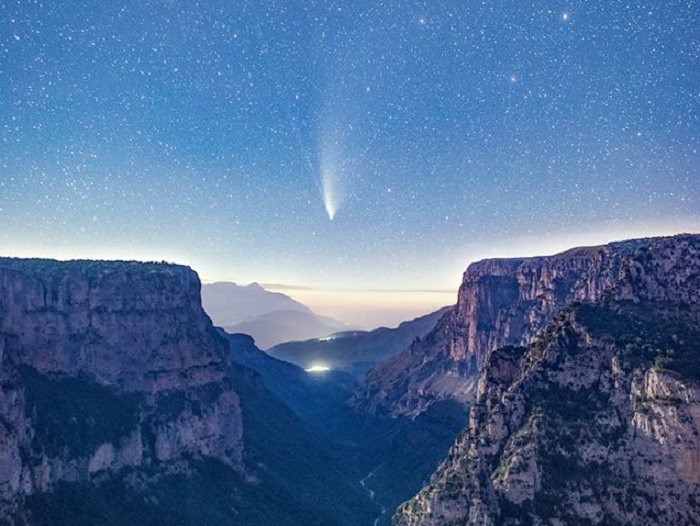 Constantine Emmanouilidi, a photographer based in Thessaloniki, traveled to Vikos Gorge in Epirus, northwest Greece, to capture this stunning photo of the comet Neowise crossing over the canyon.
Vikos Gorge, part of the 12,600 hectare Vikos-Aoos National Park, is listed in the Guinness Book of Records as the deepest canyon worldwide in proportion to its width.

Emmanouilidi, @conemmil/Instagram, says he waited all night long to capture the scene, which occurred just before sunrise. Neowise, a comet which was only discovered in March of this year, has been visible to the naked eye for some days, and will remain so until mid-August.
It is the brightest comet which has been visible from the Northern Hemisphere in approximately 25 years.
Vikos Gorge has been carved out of the rock over millions of years by the Voidomatis River, a tributary of the Aoos River. As it splits the mountain in half, its slopes expose rock formations of limestone and dolomite, dating back to 150 million years. Its nearly-vertical cliffs rise up to a height of 1,700 meters (5,577 feet).