GRNews
GreekReporter.comGreek NewsEconomyGreece Extends Entry Ban on Some Non-EU Nationals, Including US, Until July...

Greece Extends Entry Ban on Some Non-EU Nationals, Including US, Until July 31 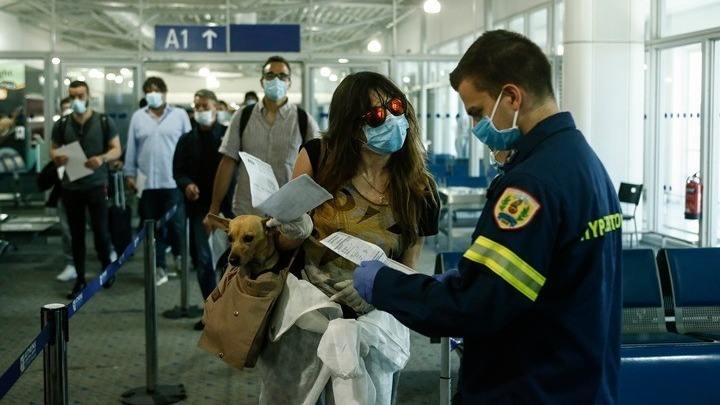 The ban on entry into Greece of non-EU citizens has been extended until July 31, according to a new aviation directive (NOTAM) coming from the national authorities.
Following the decision of the European Union to remove Serbia and Montenegro from the list of Covid-19 safe countries from which travel is allowed, the twelve countries that remain on the European list and are exempted from the travel ban are the following: Algeria, Australia, Canada, Georgia, Japan, Morocco, New Zealand, Rwanda, South Korea, Thailand, Tunisia and Uruguay.
All flights from Albania and North Macedonia will land at Eleftherios Venizelos International Airport in Athens until July 31, 2020 while the ban on flights to and from Turkey is extended until midnight on Friday, July 31, according to the NOTAMS issued by Greece’s Civil Aviation Authority (CAA).
The CAA has informed airline passengers that due to the upsurge of Covid-19 cases in Albania and North Macedonia, an air directive, or NOTAM, entered into force on Thursday, July 16, and will remain in effect until July 31 at 23:59. The ruling stipulates that all flights between Greece and its two northern neighbors will only be allowed to operate via Eleftherios Venizelos, excluding flights to and from all other Greek airports.
Regarding flights to and from Sweden and Turkey, the NOTAM and the flight ban for the two countries continues to apply, in the case of Sweden until Sunday, July 19 at 23:59 and for Turkey until Friday, July 31 at midnight.
Finally, the CAA also says that between Thursday, July 16 and Monday, August 31, the mandatory Passenger Locator Form (PLF) for all passengers on international flights to Greece can be completed at the electronic address https://travel.gov.gr/ up to one day before arrival.
Passengers should note that before airlines can accept passengers for boarding they are required to check: a) the PLF submission confirmation at least a day before the flight, which is a mandatory travel document, and b) that the QR code corresponds to the PLF.
Airlines that fail to comply with the requirement to check these documents will be responsible — having to repatriate the passengers at their own expense.
COVID-19 tests on passengers arriving on international flights to Greece may be carried out, in accordance with the guidelines of the Ministry of Health, the National Organisation for Public Health and Civil Protection services.