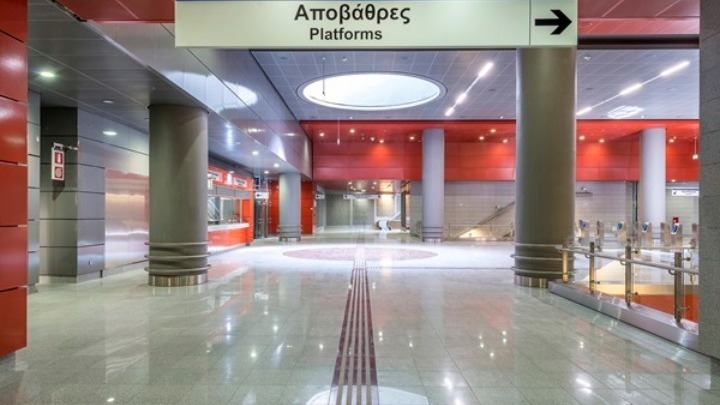 Three new metro stations opened to the public on Tuesday in the Greek capital.
Named after the Piraeus suburbs of Aghia Varvara, Korydallos and Nikea, the new Line 3 metro stations will serve 60,000 people daily, a number that will further increase when the extension of line 3 reaches the Municipal Theatre of Piraeus in 2022.
The distance from Nikea to Syntagma will be covered in 14 minutes and from Nikea to the airport in 55 minutes. The service frequency between 07:30 until 17:30 will be just eight  minutes.
The new stations, apart from facilitating citizens’ transport, are expected to significantly improve vehicular traffic in the areas concerned.
At the official opening of the three stations on Monday, Greek PM Kyriakos Mitsotakis noted that traffic in these suburbs, and well as greater Piraeus, will be greatly ameliorated, with 10,000 fewer vehicles. When metro Line 3 intersects with the electric train (ISAP) Piraeus station in summer 2022, some 140,000 passengers are projected to be using the new stations every day.
Athens metro Line 3 now has 24 stations, which will increase to 27 in 2022 with the addition of three more stations, at Maniatika, Piraeus and the Piraeus Municipal Theatre.
Source: AMNA