By Tasos Kokkinidis
July 6, 2020
Facebook
Twitter
WhatsApp
Linkedin
Email
A young student from Greece recently won a prestigious international poetry prize in a competition between hundreds of youngsters all around the world.
Dimosthenis-Dimitrios Despotidis, an eighth grade student from Campion International School in Athens, won the first prize in the poetry competition hosted by the organization Never Such Innocence (NSI), based in London.
The organization runs an international poetry, art, speech and song competition for young people aged 9-18, focusing on conflict and the range of its impacts on humanity. The theme of the competition was the “Impact of Conflict on Communities.”
The 13-year-old won in the category for ages 11-14. His “Inspirational Poem” highlighted how the Second World War had a profound impact on Commonwealth nations both during and after the years of the conflict.
“I usually write in English because I go to an English school and it’s my mother tongue. But I also try to improve my Greek,” Despotidis told Mega TV. He added that the “Inspirational Poem” was written four months ago and that his favorite poet is Lord Byron.
“What made him especially happy (receiving the award) was the fact that he represented his country. He felt proud as a Greek,” his mother, Margarita Vartholomaiou, told the the Athens Macedonia News Agency (AMNA).
“Poetry helps him to express his views and feelings,” she added, explaining that her son loves history and culture and has been “immersed” in books since he was very young.
This year’s competition marked the 75th anniversary of Victory in Europe Day, commemorating Nazi Germany’s unconditional surrender of its armed forces on May 8, 1945.
According to its website, the NSI received 4,003 entries from 44 different countries, territories and dependencies with 2,122 pieces of artwork and 358 speeches submitted. There were also 609 singer/songwriters and 914 poets who participated in the competition. 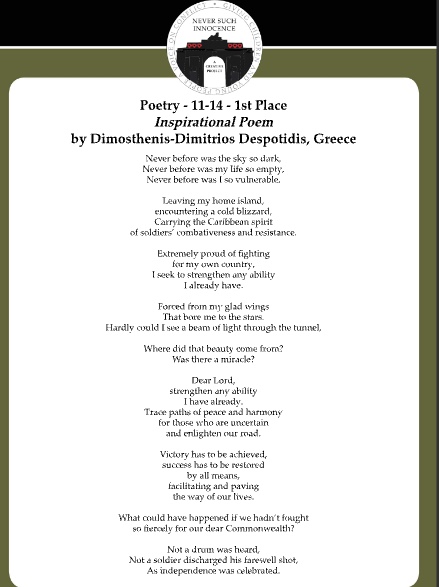 A Greek student in the Italian city of Turin has sustained serious injuries after her former boyfriend stabbed her in the neck and chest.
Diaspora

Marketing genius can take many forms -- from the "Music Man" salesmen of the early 1900s, selling band instruments to poor townspeople -- to...
Education