The much-acclaimed documentary “Olympia”, which dives into the life of Greek-American actress Olympia Dukakis, will virtually premiere in North America on July 9.

Since a theatrical premiere is difficult due to current restrictions on movie theaters, ABCinemaNOW has picked up “Olympia” to stream on its service. The film will live stream at 8 PM EST in North America on July 9, and at 1 PM in Greece and the rest of Europe on July 10.

Even though the premiere will take place virtually, the film will still very much follow the format of an in-person event. There will be a special introduction, and a virtual panel discussion set to follow the film.

“Olympia”, which won the Orpheus Award for Best Documentary at the LA Greek Film Festival, was directed by Harry Mavromichalis. The film takes a deep, personal look at the lengthy stage and film career of Dukakis, which includes movie classics like “Moonstruck” and “Steel Magnolias”.

Plenty of famous friends and relatives are interviewed over the course of the documentary, including Laura Linney, Whoopi Goldberg, Ed Asner, and of course, Michael Dukakis, Olympia’s cousin as well as the 1988 Democratic presidential nominee. 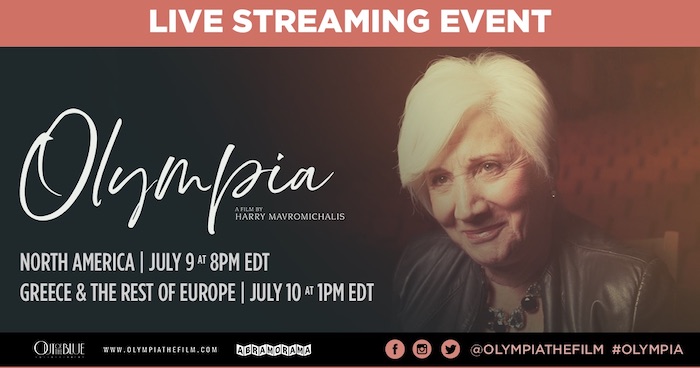 “Olympia” has already received great feedback at advance screenings, so be sure to tune in to ABCinemaNOW for the film’s live North American premiere.