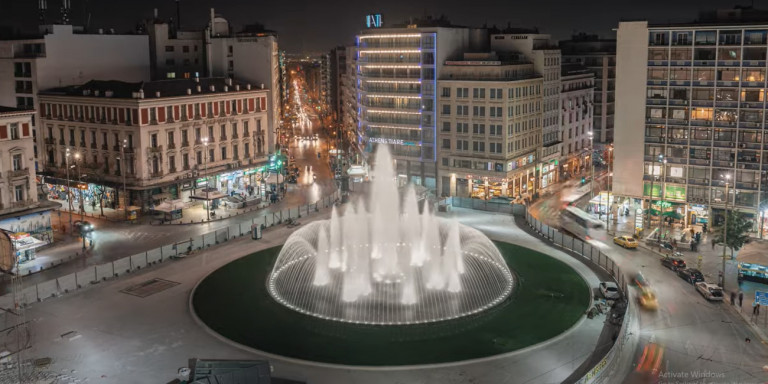 Athens’ redesigned Omonoia Square, with its signature fountain now restored, was handed over to the residents and visitors of the great city on Thursday evening.
One of the largest water fountains in Europe in terms of water volume, the 30-meter-wide fountain shoots water 20 meters (66 feet) high. It has a total of 188 water jets and 177 underwater lights.
Omonoia Square underwent a major restoration by the city of Athens with the help of private sponsorships, replacing a fountain removed in previous overhauls.

The work was completed some time ago but the square remained closed for public use due to the coronavirus restrictions.
Omonoia has undergone various transformations throughout the years. The Square, which was constructed in 1846 had as its original name Plateia Anaktoron (Palace Square).
It was given its final name of Omonoia in 1862 because it was the site where leaders of the opposing political factions gave their Oath of Peace (omonia, in Greek).

Athenians loved the fountain, and many sports fans had jumped into it to celebrate victories throughout the years. However, the popular water feature was removed in 1992 due to construction which was carried out for improvements to the Athens metro system, leaving many residents of the capital unhappy.
The revamped Omonoia Square is now brightly illuminated by LED lighting fixtures, and will be adorned with an array of plants and new shade features. A new type of pavement has also laid down there. In an important break from the past, all the new features and materials are environmentally-friendly.
The project is a far cry from previous alterations which had made the Square unrecognizable to Athenians, who began to abandon the area beginning in the late 1990s. The culmination of the decay of the square came with the economic crisis, with the final blow to the area given when the immigration crisis made it a hangout for migrants and criminal elements.
Once the commercial center of Athens, Omonoia Square had become a place where many Athenians were afraid to visit at night or avoided altogether, even during the daytime.
With the restoration of the Square and the renovation and repurposing of surrounding buildings, municipal authorities aim to revive the entire area.