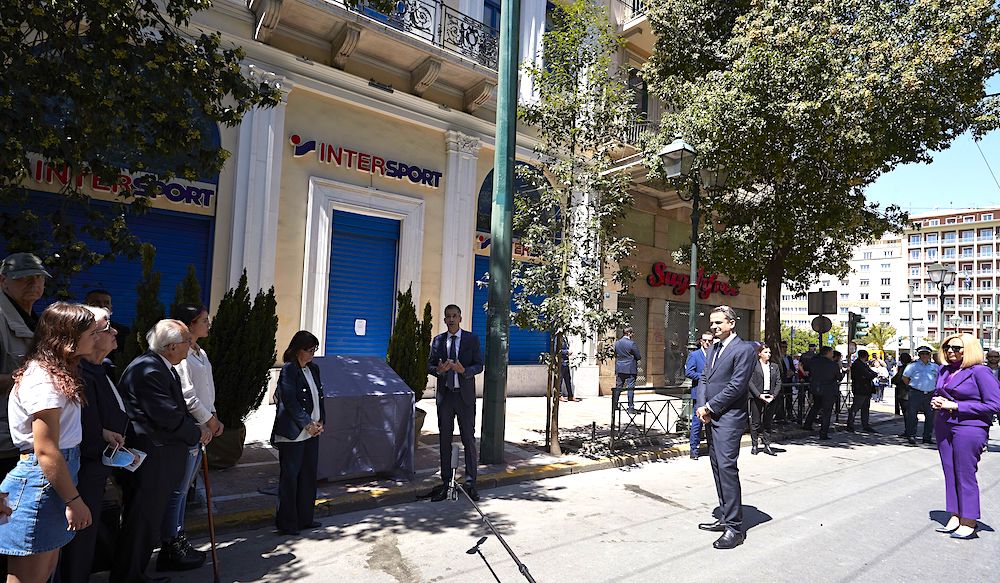 The Greek government on Saturday honored the victims of the Marfin Bank firebombing in May 2010 by placing a plaque on the site of the tragic incident.
Present at the ceremony were relatives of the victims, President of the Republic Katerina Sakellaropoulou, Prime Minister Kyriakos Mitsotakis, President of the Movement for Change Fofi Gennimata and Athens Mayor Costas Bakogiannis.
The murderous act took place on May 5, 2010, during a massive anti-austerity protest rally held in downtown Athens against the government signing the first bailout program. Protestors in the crowd broke the glass window, entered the bank, and threw Molotov cocktails in the interior, setting a fire while people were working inside.
The fire spread quickly and three employees who were unable to evacuate in time died from the smoke. Angeliki Papathanassopoulou (32 years old, pregnant in the fourth month),  Epaminondas Tsakalis (36), and Paraskevi Zoulia (35) were found dead by the fire service.
Clearly moved, President Sakellaropoulou spoke of “not just a symbolic gesture in their memory, but also a first small step to their vindication.”
“The memory of citizens who have fallen victim to hatred and ideological violence cannot be a field of political controversy and division. Instead, it must find us all united. Tragic events like this are incompatible with our democratic tradition and the society we envision. I hope and wish that never again we will experience manifestations of extreme polarization and blind violence,” the President of the Republic added.
For his part, the Prime Minister, among other things, noted: “We have honored today the memory of our three fellow human beings who were tragically murdered ten years ago at this point here. The symbolism of the movement is clear: “Never again will our country fall victim to blind division and violence.”