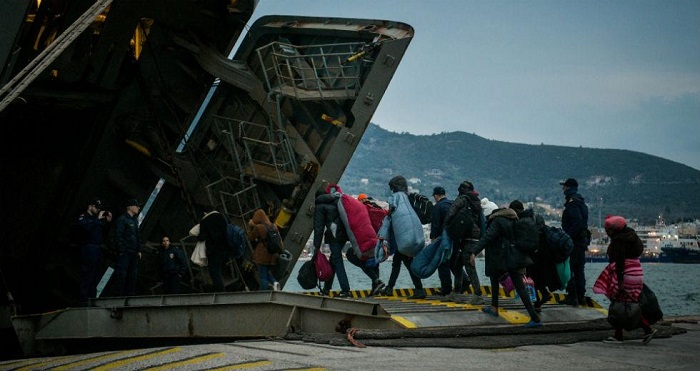 Greece is transferring on Saturday around 450 migrants who were held in a navy ship from the island to Lesvos to the mainland.
Migration Minister Notis Mitarakis said in a television interview that the migrants, who arrived in Lesvos after March 1 when Greece closed its borders to asylum seekers, will be sent to centers in Malakasa, east Attica, and Serres, central Macedonia, ahead of deportation.
From the start of March, new arrivals were registered at the central police station in Lesvos and then put on a navy ship, the Rodos, which was dispatched to the island on March 12.
Earlier in the week, a video obtained by German magazine Der Spiegel showed the cramped conditions hundreds of migrants and refugees are having to endure living on board the “Rodos.”
The footage, which has gone viral, depicts dozens of families, including young children, laying closely together on the floor of the vessel.

Video obtained by @derspiegel from inside the navy boat in #Lesbos where c. 500 refugees incl children and pregnant women are held. They are the first migrants who came after Greece stopped accepting asylum applications on 1/3. To be transferred to the mainland & then deported pic.twitter.com/VqYiw5BgMB