GRNews
GreekReporter.comGreeceHundreds of Migrants Crammed Together on Greek Navy Ship off Lesvos

Hundreds of Migrants Crammed Together on Greek Navy Ship off Lesvos 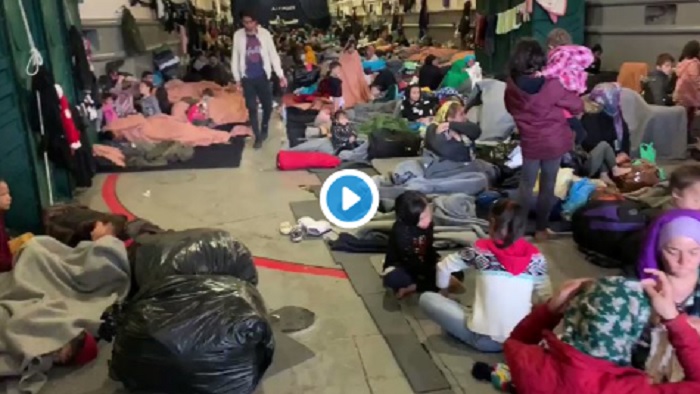 A video obtained by German magazine Der Spiegel shows the cramped conditions hundreds of migrants and refugees are having to endure living on board the “Rodos,” the Greek Navy ship the anchored off the main port of the island of Lesvos.
The footage, which has gone viral, depicts dozens of families, including young children, laying closely together on the floor of the vessel. According to Der Spiegel there are approximately 500 people in the hold of the ship, the first migrants who arrived on Lesvos after Greece stopped accepting asylum applications on March 1.

Video obtained by @derspiegel from inside the navy boat in #Lesbos where c. 500 refugees incl children and pregnant women are held. They are the first migrants who came after Greece stopped accepting asylum applications on 1/3. To be transferred to the mainland & then deported pic.twitter.com/VqYiw5BgMB

Greece said the migrants who boarded the ship last Wednesday would stay until a new facility to accommodate them had been created on the mainland.
Astrid Castelein of the UNHCR, the UN refugee agency on Lesvos, said they and other aid groups would provide mattresses and bedding, since this type of vessel was not normally meant to house people. The Rodos is normally used as a tank transport vessel for the Greek Army.