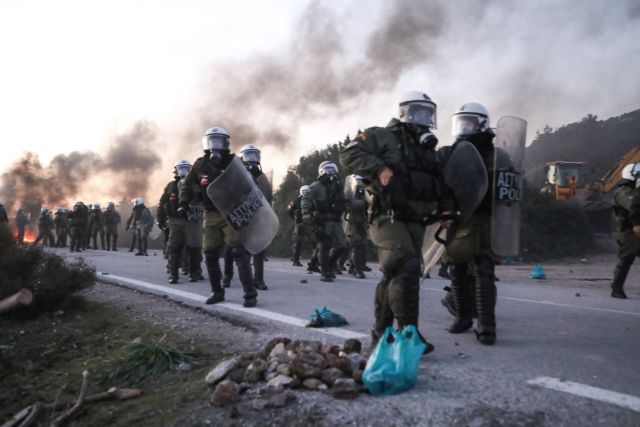 Greece’s PM Kyriakos Mitsotakis has summoned the mayors of Lesvos and Chios to an emergency meeting on Thursday in Athens, aimed at easing tensions on the islands over the construction of new migrant centers.
The government has clearly been rocked following extensive clashes between police and islanders on Tuesday which left 62 people injured.
In a major u-turn, the government announced that it was withdrawing most of the riot police units that had been stationed there to counter the fierce reaction to the creation of new, enclosed migrant camps.
The invitation to the North Aegean regional governor Kostas Moutzouris to participate in the meeting was withdrawn after a video emerged of the governor criticizing the Mitsotakis administration while making an obscene gesture.
The mayors have all been summoned in an effort to “tone down” the recent tension, government spokesman Stelios Petsas said.
Residents of the islands of Lesvos and Chios are protesting the government’s decision to build new migrant facilities on requisitioned land on these islands.
Commenting on Wednesday’s protests, clashes and injuries at Lesvos and Chios, Petsas said that these islands cannot be left unpoliced because there is a full-fledged migration crisis there at the present time.
He maintained that the police’s role on the two islands, and Lesvos’ capital city of Mytilini, is to ensure that the government goes ahead with its plans. According to the government spokesman, the riot police dispatched to the islands “were there to fulfill their mission, allowing the first phase of construction of the closed facilities.”
The first phase was completed in Mytilini on Wednesday, he said, while the first phase on Chios will be completed on Thursday.