Two Greek friends, both immigrants to Australia who shared a passion for home-brewed beer, joined forces recently in Melbourne for a daring project to launch their own brand in the over-saturated Australian market.

Petros Gyftopoulos, a chemical engineer by training, and Yiannis Psimoulis, a professional brewer, have recently founded a company called “Fall & Rise Brewing.” Their very first batch had an amazing beginning, selling out in the space of three weeks upon its launch in November of 2019.

A second batch launched for the Christmas period also did amazingly well, as 80 percent of the product sold out right away.

Gyftopoulos, who was also a television personality back in Greece, left his crisis-ridden country in 2013 for a better future in Australia. He was already a home-brewing enthusiast at that time.

“Trying recipe after recipe, I got really excited about the idea of producing beer,” he tells Greek Reporter.

“It was really stimulating, using my chemical engineering background to make something happen in front of my eyes. It was great making a product that I actually enjoy consuming.”

A chance meeting in Sydney with Greek professional brewer Yiannis Psimoulis was the spark that gave impetus to the dream of creating a new brand of beer. Psimoulis, who had worked as a former bank employee in Athens while honing his talents as a brewer, gave up his life in Greece to move permanently to Australia to join Gyftopoulos and launch their new venture.

“The feedback is amazing — Australian consumers have accepted our product. We were very careful about our recipe because the market is over-saturated and we had to create something that was different from the rest,” Gyftopoulos says. 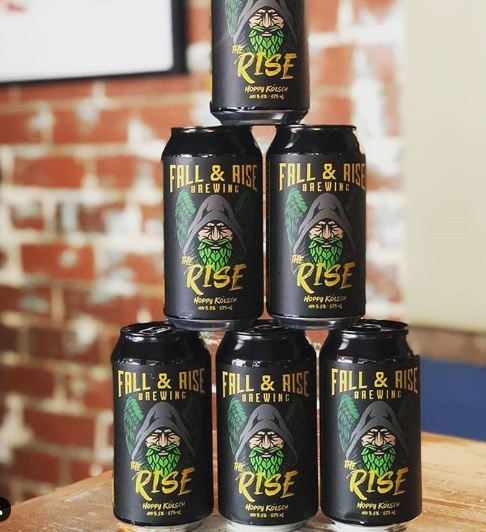 Their recipes for Fall & Rise Brewing have “European roots,” he explains, as they are mainly inspired by current European trends — but with a twist, giving a unique character. The first recipe launched in November is a Hoppy Kölsch with an aroma of pineapple and a smooth, light body.

Their next recipe will be an Irish Stout with hints of chocolate and coffee to celebrate St. Patrick’s Day on the 17th of March and get ready for Australia’s upcoming chilly winter nights.

Gyftopoulos was a familiar face among Greek TV viewers in the early 2010’s, but his ambitions to advance his career in chemical engineering, coupled with the insecurity brought by the economic crisis which was hitting Greece at the time, forced him to look abroad for a better future for his wife and himself.

“It was between Canada, the US and Australia. I rejected Canada because it is too cold, I had difficulties in getting the Green Card in the US and I ended up in Australia, where I grabbed the huge opportunities the country offers,” he relates.

Parallel with his beer adventure, Gyftopoulos also began working for a large international concern. “My career took off, and in the space of seven years, the opportunities were there: I started as a chemical engineer, then a project engineer, then project manager and now I am national operations manager for a big international company,” he states.

Despite his great success in Australia he does miss Greece. “I miss my family. As time passes I miss the country more and more. At some stage in the future I would like to come back and grow up with my family and loved ones,” he tells Greek Reporter.

But for the time being Gyftopoulos is concentrating on establishing his newly-launched beer in the Australian market. “I am trying to concentrate on this project which I really love. This keeps me going.”

“We dream big, but every dream has to start from somewhere – so our first stop is Melbourne!” the entrepreneur adds with great enthusiasm.”

Fall & Rise Brewing is the main sponsor of a concert featuring the band Cats and the Canary, which will perform Greek classic film tunes and other songs at the Toff in Town Venue this coming Sunday.