TechNews
GreekReporter.com entertainment Celebrities The Humility of a Giant: Kobe's Efharisto to Greece

The Humility of a Giant: Kobe's Efharisto to Greece 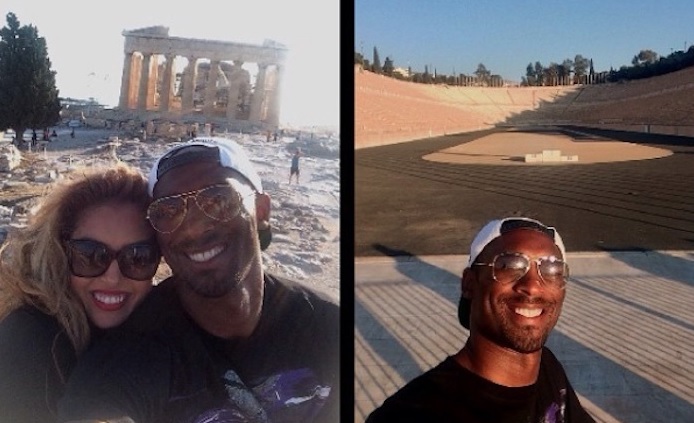 Legendary NBA player Kobe Bryant, who died with his daughter Gianna Maria Onore in a California helicopter crash on Sunday, won over Greeks with his humility during a family vacation in the summer of 2014.
Bryant, with wife Vanessa and their two daughters Natalia and Gianna, had visited Athens and the cosmopolitan islands of Mykonos and Spetses.
Petros Nazos of Mykonoslive.tv says that Bryant was really friendly and very approachable during the five days he stayed on the island. “We had never come across such an easy-going and kind super-star ever before,” he says.
“Unlike other VIP’s who come to Mykonos and try to hide themselves from journalists and paparazzi, he was actively encouraging us to film and photograph him and his family when he was taking a stroll in the streets, or when he was dining. It was unprecedented,” Nazos says.


He recalls an incident, captured on video, when the NBA superstar spotted paparazzi keeping their distance trying to snap a photo. “He called us to come closer and asked us to take pictures of him and his family. Afterwards he said ‘Efharisto‘, thank you in Greek,” Nazos remembers.

The  Mykonoslive.tv journalist notes the love and affection Bryant showed to his wife and children. “He was a great family man. He loved his wife and daughters and he was spotted playing rock paper scissors with his daughters.
“He and his family loved the island, they strolled through town. Bryant loved jet-skiing. He said he was really taken aback by the clear blue waters of Mykonos… By the time he left Mykonos, I felt we became friends,” Nazos says.
During the summer of 2014, the NBA superstar also visited Athens. “Efharisto” (Thank you), he wrote in an Instagram post after he had had the opportunity to visit the Acropolis and the Panathinaikon Stadium.
“The beautiful city of Athens with my Latina Aphrodite @ladyvb24 and hangin at the stadium where the first modern Olympics was held in 1896,” Bryant wrote.

Greek doctors took to the streets on Tuesday to protest the "suffocating" conditions in Greek hospitals, specifically Covid-19 wards.
Cyprus

The entry of Cyprus for the 2021 Eurovision song contest has sparked wide controversy among ultra-conservative Christian groups on the Mediterranean island.
Greek News