State-of-the-Art American Drones Go Through Their Paces in Larissa, Greece

By Nick Kampouris
December 19, 2019
Facebook
Twitter
WhatsApp
Linkedin
Email
General Atomics Aeronautical Systems, the company which produces the new, state-of-the-art American ”MQ-9 Guardian” drones, presented its new unmanned aircraft today at the Hellenic Airforce (HAF) military base in Larissa, Thessaly.
The ”MQ-9 Guardian” and the tremendous capabilities it can have in the southeastern Mediterranean were unveiled today by the US company, when it took part in four different exercises to showcase the various aspects of its usefulness in the broader Greek region. 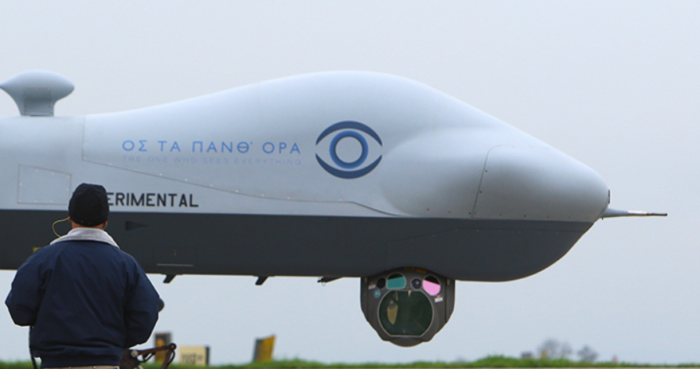 One especially interesting detail is that the new US drones have an ancient Greek inscription on the front side of their fuselage, which is a part of a saying originally uttered by Menander, a Greek dramatist from the fourth century BC.
The inscription says ”ΟΣ ΤΑ ΠΑΝΘ’ ΟΡΑ,” which means ”The one who sees everything,” referring to a supreme power that sees everything on Earth in order to eventually judge and impose justice.
These new American unmanned vehicles can work perfectly alongside Greece’s F16 fighter jets and can interface with all NATO systems.
Greece is planning to purchase a number of these drones in the near future to add them to the country’s arsenal since Athens is always searching for new, innovative ways to upgrade its military capabilities using “smart” technology.