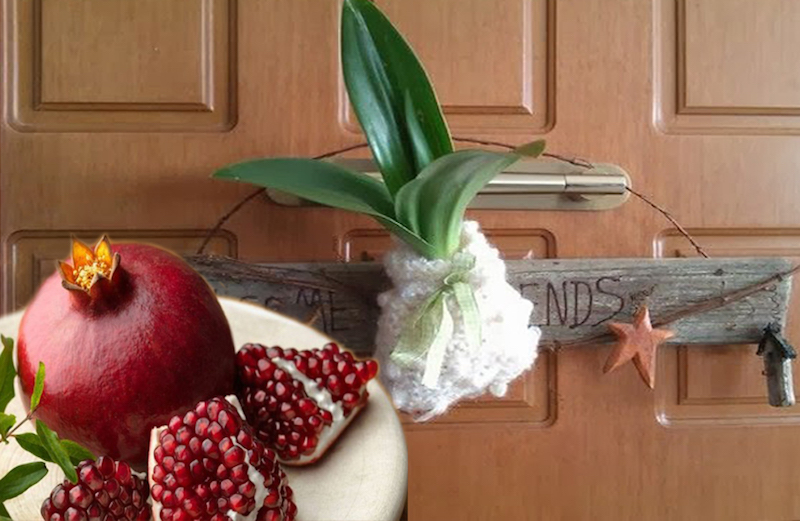 The word Γούρι (Gouri) means both “good luck” and “good luck charm” in Greek. Objects and practices which have been considered to attract good luck are part of ancient customs that have existed through the ages — and are seen especially often during New Year celebrations in Greece.
The first form of lucky charms we know of were talismans, with primitive representations of nature and replicas of those who wore them. Today, in a similar way, Christians sometimes wear holy icons and other paraphernalia in the hope that the saints will protect them from misfortune.
Many modern-day Greeks, including Christians as well, still wear these ancient lucky charms and take part in a range of New Year’s traditions based on timeless folk beliefs.
Some charms are believed to exorcise evil and attract good luck, especially during the festive days of Christmas and the New Year. The most common symbols we see during New Year’s celebrations are the pomegranate, the onion, and the coin of the Vasilopita cake which all are eager to receive so that their year will begin with good luck.
The Pomegranate
For thousands of years, the pomegranate has been considered by different peoples and cultures as the ultimate symbol of fertility, abundance and good luck. Before taking up residence in a new home, ancient Greeks would throw a pomegranate against the threshold, a custom in which many still practice today on New Year’s Day. To break a pomegranate is one of the most common New Year’s customs and signifies making a good start to the year.
The custom calls for the person who is considered the luckiest family member breaking a pomegranate on the front door of the house after the revelers exchange good wishes, so that the new year will be full of good luck.
The Onion
The custom of hanging a huge onion outside the home, well-known to all Greeks, goes back to the days of antiquity as a symbol of regeneration and health. This perception is due to the great vitality of the onion bulb, which can be maintained and even sprout over one year without even being in the soil.
Even now in many areas of Greece, you will still see people hanging a large onion outside the house on New Year’s Eve.
The Vasilopita Coin
The Vasilopita cake is the main Greek New Year’s custom and one of the few ancient customs that have been handed down to us today through the ages. In ancient times, there was a festive bread which the ancient Greeks offered to the gods during large rural celebrations.
An example of these feasts is the “Kronia,” the feast of the god Cronus, from which the word χρόνος (“chronos,” meaning year) derives. During the Kronia, people would make cakes and pies into which they placed a coin. Whoever happened to get the piece with the coin would supposedly enjoy good luck all year.
The festive breads were round, just like today’s Vasilopita. Traditionally, the coin was silver or gold and had real monetary value, in addition to the luck that it supposedly brought. Today the coins used in the Vasilopita cakes are mostly symbolic.

Nowadays, there are many stores and boutiques in Greece which take these ancient New Year’s lucky charms and create beautiful and imaginative jewelry and gifts.
Bracelets, pendants, rings, brooches, keychains, and many other items are all made with special attention to detail, fine style, and exceptional craftsmanship as well as what Greeks call “meraki,” or good taste. You can easily find them online in e-shops such as Doro Mou, EfiStore, and Etsy.com.
Why not participate in some of these ancient customs and purchase one or more of these beautiful gifts to let that someone special know that you are thinking of them and wish them the very best for the new year?