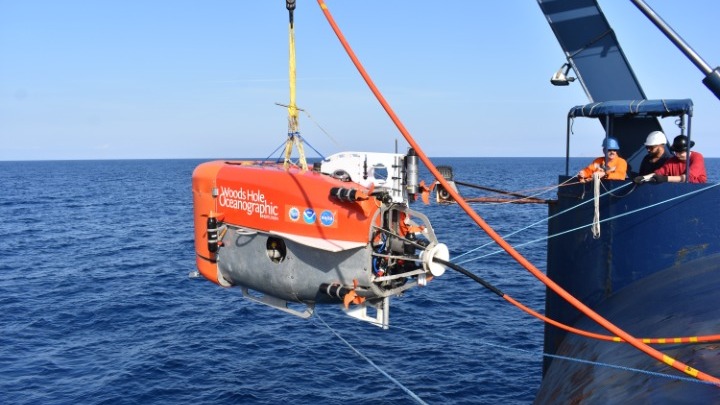 A team of international scientists researching the submerged Kolumbo volcano off Santorini discovered unknown hydrothermal fountains, or “chimneys,” around which bacterial communities are flourishing.
The oceanographic research mission, consisting of 30 scientists from the United States, Greece, Australia and Germany, is funded and supported by NASA.
The scientists tested new “intelligent” technologies with Autonomous Underwater Vehicles (AUVs), which in the future can be used to explore alien oceans on distant satellites of Jupiter and Saturn, such as Enceladus and Europe, where submarine traces of life will be sought in extreme and potentially dangerous environments.
Researchers were satisfied with the ability of robotic underwater vehicles to receive orders and then successfully execute them autonomously in an unknown environment such as that of Kolumbo.
The volcanic cone, which has a base diameter of three kilometers and forms a crater of 170 meters diameter, rises from a depth of 504 meters to a depth of 18 meters below sea level. This submarine caldera is very close to the caldera of the Santorini volcano, and has an important hydrothermal system, from which almost pure carbon dioxide gas is released.
Greek and foreign researchers intend to participate again in a NASA-funded research program to return to Kolumbo for new trials and research in the future. In the meantime, they will write a series of scientific publications to present their findings in detail.
Participating in the mission were the Woods Hole Oceanographic Institute of Massachusetts (headed by Mission Leader Richard Camille), Massachusetts Institute of Technology (MIT), the University of Michigan, the University of Sydney, the National and Kapodistrian University of Athens and the Institute of Marine Biology, Biotechnology and Aquaculture of the Hellenic Center for Marine Research (ELKETHE).
The Greek scientists participating were Assistant Professor of the National and Kapodistrian University of Athens Praskevi Nomikou and Dr. Paraskevi Polimenakou of ELKETHE, as well as two Greek researchers living abroad, Dr. Angelos Mallios and Maria Pachiadaki of Woods Hole Oceanographic Institute of Massachusetts.
Nomikou told the Athens-Macedonian News Agency that “Even for NASA, Kolumbo is a unique underwater laboratory, with all the conditions and life forms that can be found on other planets at the bottom of its crater. Autonomous Underwater Vehicles have been successfully tested, as well as specialized software that allowed autonomous sampling at the bottom of Kolumbo.”
“This submarine volcano,” she added, “must be monitored on a permanent basis with equipment installed at its bottom, as is the Santorini volcano. It is ideal for scientific research on a global level and Greek scientists must always play a leading role in any research in Greece.”
Kolumbo is an active submarine volcano in the Aegean Sea, situated about 8 km ( 5 miles) northeast of Cape Kolumbo, Santorini.
(Source: Athens-Macedonian News Agency)