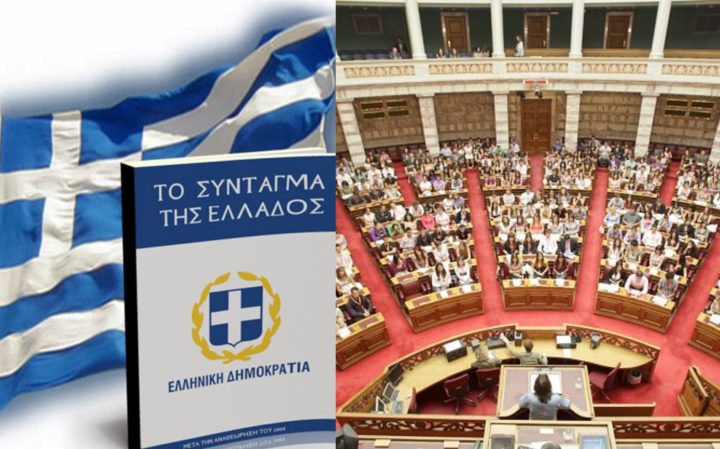 After a marathon session, the Greek Parliament finally agreed on Monday afternoon on which new Constitutional amendments will be approved by the House.
The Parliament finalized the Constitutional revision procedures which began back in 2016 upon the conclusion of the session.
A total of nine amendments received the requisite votes to be passed.
The two most important amendments which were voted on by Greek MPs concerned the alteration in how the President of the Republic is elected and the long-awaited establishment of Greeks abroad being able to vote from their place of residence (with certain caveats).
In addition, there is now a Constitutional guarantee that every Greek citizen must have a minimum guaranteed income and further limitations have been placed on the rights of Parliamentarians to prosecutorial immunity.
The government’s new proposal for a Constitutional guarantee that every citizen in the country must have a minimum guaranteed income received 190 positive votes.
The government’s proposal for changing the way in which the President of the Republic is elected garnered 158 votes. Additionally, from now on, a snap national election will not be required if a candidate does not receive more than 180 votes.
In another related matter, the next President of the Republic will be able to be voted in even with just a relative majority of the MPs, even if this is less than 151 votes.
The New Democracy proposal for the right of Greek citizens abroad to vote from their place of residence in Greece’s national elections received 212 positive votes, and the proposal for limiting parliamentarians’ rights to legal immunity gained 179 votes.
The Constitutional amendment regarding the Greek diaspora vote states that Greeks abroad will be able to ”…vote at the place of residence.”
However, the amendment dictates that the bill that will soon be brought to Parliament specifying the details must include restrictions such as proof that the voter has a genuine connection with the country, is personally present at a physical place to vote, and has been living outside of the country for a specific amount of time.
All these details will become public at a later stage, when the Government brings forth the actual bill.
The other amendments passed were of relatively minor importance, including equating military judges with those in the civil sector and other issues.
The amendment which gained the most support and garnered the most votes concerned a change in the ministerial immunity law. A total of 274 MPs voted in favor, making it more difficult for Ministers to avoid prosecution if they commit a crime.
The current Constitution of the nation of Greece was established in 1974, at the beginning of the third Hellenic Republic, following the end of the military dictatorship which came into power in 1967.