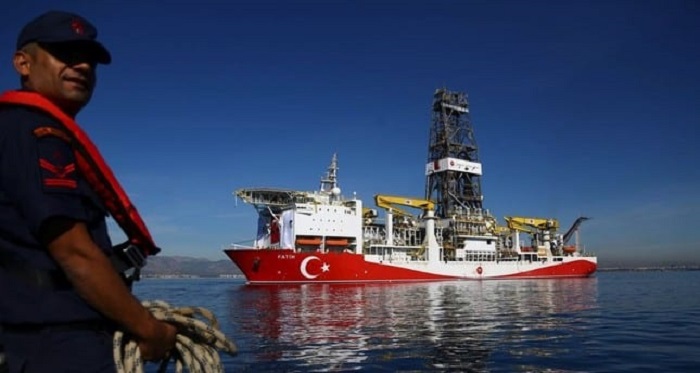 The Turkish oil-and-gas drilling ship Fatih has started its operations off the coast of northeastern Cyprus, Turkish vice president Fuat Oktay said on Friday, despite warnings from European Union for Ankara to stand down.
On Monday, the EU Foreign Affairs Council adopted a framework for restrictive measures against Turkey over its drilling activities in the eastern Mediterranean.
Turkey, a formal candidate to join the EU despite ever-worsening relations with Europe, criticized the decision and said it would not cease drilling because it is operating on its own continental shelf or areas where Turkish Cypriots have rights.
Another Turkish drillship, the Yavuz, is stationed off the west coast of Cyprus.
The European Union’s foreign affairs chief, Federica Mogherini, warned Turkey on Wednesday to stop its drilling efforts off Cyprus.
Mogherini spoke during a European Parliamentary plenary debate about Turkish drilling in Cyprus’ Exclusive Economic Zone (EEZ) in defiance of the legitimate government on the island, which belongs to the EU.
“What I want to stress is this – I said also in the beginning: sanctions and the framework of introducing sanctions, is an instrument to put pressure and to try and provoke a change,” she began.
“The objective here is to change the attitude, stop the drillings, and – I am surprised not many of you did not underline this – try to help the UN finding what would be the real solution the settlement of the Cyprus issue,” Mogherini explained.
That was in reference to United Nations Secretary-General Antonio Guterres wanting to restart the reunification talks which fell apart in July, 2017 at the Swiss resort of Crans-Montana.
It was then that Erdogan and Turkish-Cypriot leader Mustafa Akinci flatly stated they would never remove a 35,000-strong standing army on the occupied northern third of the island, and wanted to keep the right of military intervention.
While at the same time reaching out to Turkey to stop its drilling, Mogherini also reiterated the European Union’s complete support for Cyprus.
“If the rights, if the sovereignty of one of our member-states is violated, as it is the case this moment with this Turkish drilling activities, the rest of the EU has to come together and not only show solidarity, but also act in solidarity with Cyprus,” she said.