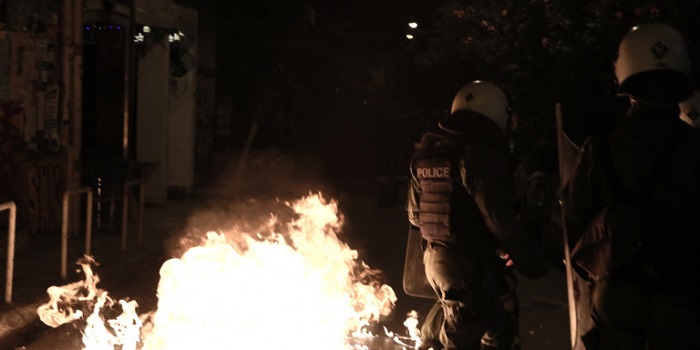 Three Greek riot police officers were injured on Thursday night when their squad came under attack by a group of some 25 self-styled anarchists lobbing homemade firebombs in the downtown Athens district of Exarchia.
Of the three officers who were injured, one was discharged from the 401 Military Hospital in the early hours of Friday, while the second continued to be treated for burns and the third for an injury he sustained to his head.
Police arrested one suspect, identified as one of the oldest and most active members of the anarchist group Rouvikonas (Greek for “Rubicon”), near the area of the attack.
The firebombing occurred quite close to the headquarters of the Movement for Change party, whose spokesman, Pavlos Christidis, described it as a very serious incident.
“The government must move from words to actions. The murderous attacks do not stop and we were lucky not to mourn any victims,” Christidis said in a statement to the press.