“Few Hours in Athens” Is Taking Film Festivals By Storm

We recently sat down with the writer, director, and lead actor of Few Hours in Athens, to talk to him about the process of making his first film from start to finish.

Shot in Greece, “Few Hours in Athens” premiered at the Los Angeles Documentary Film Festival (DOC LA), where it managed to snag two of the festival’s most prestigious awards. Papagyropoulos’ movie won Best Film of the competition, while his lead actress, Danae Vasilopoulos, won the Best Actress award for her performance.

The Greek filmmaker spoke about his experience shooting in Athens, his background in film and acting, and the challenges and rewards of making your own film. He also shared his inspiration for making the movie — the yearning for a simpler, more innocent and romantic time.

Tell us a bit about your background in film and acting.

When I was ten years old I found an old Sony Handycam of my father’s, and I would shoot videos for fun based on “Star Wars” (I had a Darth Vader helmet and light sabers at home). That was technically my first experience.

At 18, I enrolled in an acting school in Greece called Melissa Art School, in Kallithea. The first time I went up on stage I was supposed to improvise a break up scene with a girl, and I remember how natural and effortless it felt. I knew I wanted to keep doing this.

After a year I left acting school and took on some roles in Greece, including a couple of independent films and a theater production of “Scooby-Doo.”

How did you end up in Hollywood?

My dad suggested I go to the US to join my older brother, who was in Los Angeles. So that’s how I ended up in LA. 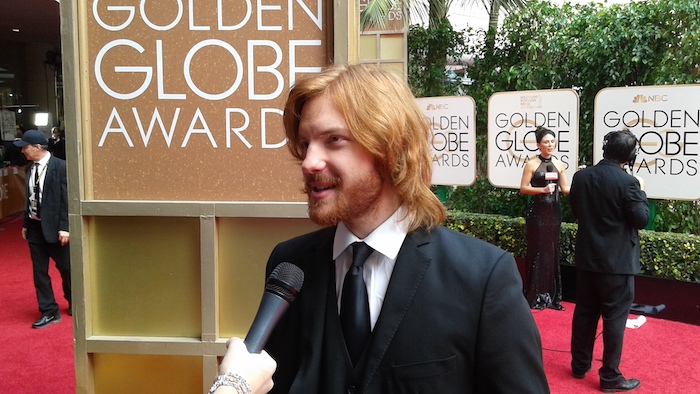 And how did you find that the acting world in Hollywood was different from that of Greece?

In my school, there was a saying: “if you’re the best in the room, you’re in the wrong room.”

In Greece, even though I felt my acting school was very good, most of the acting organizations and classes I encountered were somewhat unorganized and not methodical. They threw their actors into the deep end without much guidance and instruction.

Whereas in the US, I think things are much more organized, and there is much more competition in terms of numbers, which challenges me and drives me to do better as well.

This is your first film. Where did you get the inspiration for it?

LA can be a very lonely city. I had been here for a long time without having the chance to go back and visit Greece, which feels like a warmer place; not just in terms of weather, but in the warmth and openness of the people.

So I was missing that feeling of warmth and home, and when I finally got back to Greece, a friend of mine told me he had bought a camera and we should shoot something. I started writing a script to shoot something simple, and because of where I was in my life, the script just kept getting bigger and bigger.

I realized I wanted to create a romantic film, to portray an innocent first love type of feeling in my movie.

Did it feel intimidating to create your first film?

Not at all. It was such a wonderfully creative process.

I would wake up in the morning, and even if I had only slept for 3-4 hours I would be full of energy all day, trying to finish what I needed to do for the film.

I was also very lucky to find Vagelis Tzifakis (who at the time was around 21 or 22), a great DP that a friend recommended to me. I saw that he absolutely loved what he did, and those were the kinds of people I wanted on set: people who were very passionate about their craft and willing to work but knew that this wasn’t being done for the money.

Vageli helped put together the rest of the team, and honestly I couldn’t have asked for a better team to film this project. Every single person in the cast and crew was truly exceptional. I was especially grateful to have legendary actor Spyros Fokas in the cast, who really helped us out.

But was it difficult to be an actor, director, and producer at the same time?

Very difficult. From the moment we started, I felt like I always had to be in motion and be doing at least one of these roles. And it was sometimes hard to get fully absorbed into one role (i.e. acting) without getting producer and director responsibilities out of my mind.

How many days did filming take?

I think we shot the film in just over nine days, but over the course of a few weeks because of Danae’s (the lead actress) schedule, who was still in school.

And how did you find your talented lead actress?

I found Danae through acquaintances, and the first time she did a cold reading of the script she absolutely nailed the character. I asked her if she spoke English, because I wanted to film in English, and I realized she spoke better English than I did.

Talk to us about the film’s premiere in an LA film festival – it must have felt incredibly rewarding.

First of all, everyone was telling me not to make my film 45-60 minutes. That no one would accept it, no film festival would take it that way.

However, while we were filming I saw the natural progression the story was taking, and it ended up right in that range at 45 minutes. I wanted to do the story justice, not make the film a length that was most suitable for submission.

When I first submitted to film festivals, over the course of a few months no one accepted it,  and I felt very discouraged. I thought, even if one festival accepts “Few Hours in Athens”, that would be great.

Well, after the initial disappointment, 10 festivals have accepted the movie so far, and it has won 4 awards. It was at Indie Short Fest (Best Romantic Film), European Film Festival (Best Feature Film), South Film and Arts (Best Indie Feature), and The Lift-Off Sessions, just to name a few.

So as you can imagine, I was incredibly happy to have the Los Angeles Documentary Film Festival accept it, especially because the premiere of the film received such great feedback and plenty of acclaimed people were in the audience, who later spoke to me about how much they connected with “Few Hours in Athens”.

How was your experience filming in Greece?

Actually, it was much better than any experience I’ve had filming in the US. In the sense that it was much easier to shoot and things felt more free.

I had to get a few filming permits for shooting near historical monuments in Athens, obviously, but overall, we could shoot scenes with more ease. In the US, I feel like the second you have two cameras and actors out, someone stops you and tells you that you have to get an expensive permit.

The Greek crew I worked with knew exactly what they were doing and worked at the same level as professional crews in the US.

What advice would you give to first-time filmmakers?

That setting up cameras and equipment takes way longer than you think. When you’re on the other side of the lens as an actor you don’t really realize it, but as a director, you really have to understand how much time this all takes.

The first day, I had programmed 5 scenes to be shot, and we only shot 3. And I realized I had to adjust my schedule, because I also wanted to be considerate of the crew. Even if I wanted to go ahead and keep shooting, people needed their rest and needed breaks.

Lastly, what are your plans for the future?

I have finished a feature length script, and I have a lot of other projects I also want to start, but I’m aware I need a team to bring these projects to life. So I’m currently looking for producers and financiers willing to back these movies so I can move forward.

This film has been a great start, and things have surprisingly gone better than I imagined, so I have high hopes for the future.