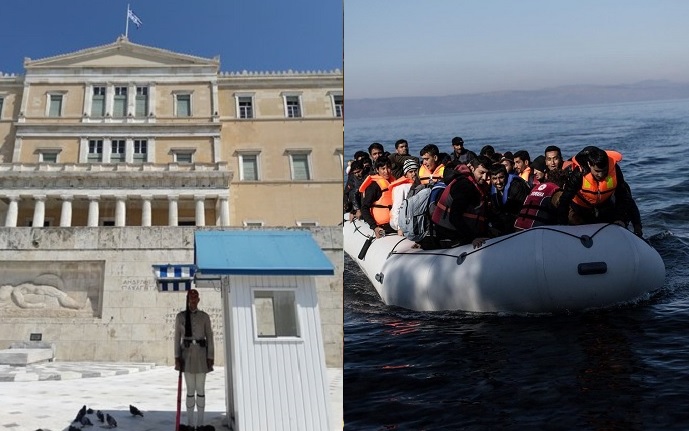 Greek MPs in the early hours of Friday approved a government bill aimed at easing pressure on the Aegean islands by speeding up asylum procedures and returns of migrants to Turkey, despite warnings by rights organizations describing it as “a significant backtracking” in the rights of migrants.
The bill was supported by governing New Democracy and centrist Movement for Change lawmakers. All other parties voted against it.
The vote came after a tense day of debate in Parliament, with Prime Minister Kyriakos Mitsotakis clashing with SYRIZA leader Alexis Tsipras over their parties’ respective approaches to the refugee problem.
“Greece is finally acquiring a clear, concise and functional system of asylum,” Mitsotakis said.
“Every application for asylum will henceforth be processed within six months, as opposed to the current nine, and decisions will be made known to the applicant within 10 days, as opposed to the current 20,” elaborated Mitsotakis.
However, he underscored that “if the applicant is not cooperating with authorities or leaves the country on the sly, these applications will be voided by default.”
Moreover, Mitsotakis said that the bill simplifies and shortens the granting of asylum to those he called the “real refugees,” and prioritizes refugee families, to whom the law grants instant access to health and education services, he noted.
Regarding additional measures, Prime Minister Mitsotakis said that increased patrols in Aegean waters, including the use of thermal cameras, will also be introduced.
SYRIZA leader Alexis Tsipras charged during a scathing criticism of the draft bill that the government is turning the migration issue into a national and Greek-Turkish issue, instead of an international and European one.
Among the criticisms leveled at the government, Tsipras noted the abolition of the Migration Policy Ministry, “transforming the refugee issue into one of suppression,” the creation of hotspots with inhumane conditions and the lack of preparation of local communities to welcome refugees.
Certain regulations of the bill, the former Prime Minister said, contravene international law, the Geneva Agreement and EU directives.
The proposed legislation will “make life difficult for those applying for asylum,” he said. Trying to resolve the issue “with far-right moves, nationalist lies and right-wing suppression, the refugee issue cannot be managed,” Tsipras concluded.
Rights groups oppose bill
Earlier, fifteen humanitarian organizations called on members of Parliament to refrain from passing the bill.
The fifteen said that the new draft laws “do not take into account the reality on the ground; they could also lead to violations of national and EU laws.”
Additional problematic issues the bill introduces, they said, include “short deadlines, the practical obstacles to accessing the application process for refugee status, and the unjustified extension of detention.”
They also charged that the bill does not improve processing time or even guarantee its shorter duration, and the fast-track process under which it was introduced “did not allow adequate time for review and commentary.”
Among the fifteen groups are ActionAid Hellas, Doctors of the World, the Greek and Danish Councils of Refugees, Defence for Children International, the International Rescue Committee-Hellas and Praksis.
(with information from AMNA)