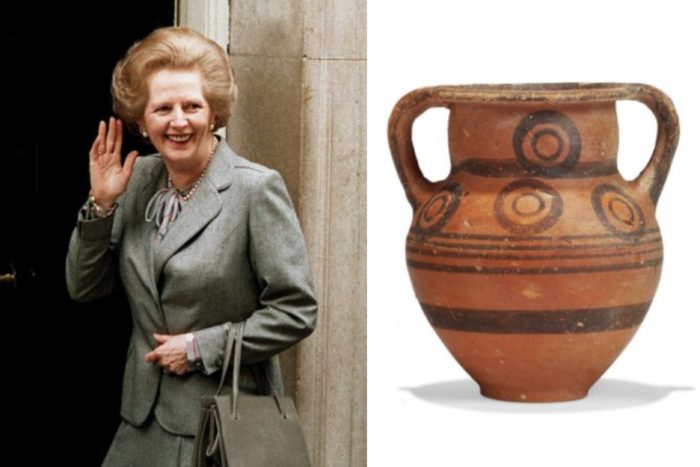 A very peculiar incident was recently revealed by historian Maria Paphiti, involving a precious ancient vase from Cyprus that was once offered to the UK as a state gift.
It all started last May when the well-known Christie’s auction house sold an ancient vase from Cyprus.
Paphiti, a historian and consultant specializing in Byzantine art, Russian icons and works of art discovered that the ancient pottery sold by Christie’s was not a simple object that belonged to a private collection.

Whilst researching #Cypriot pottery,I came across this bichrome vase that was given by President Vassiliou to Margaret Thatcher. Sold at #Christies in May’19,it fetched 6,000 GBP,a price significantly higher than its pre-sale estimates 700-1,000 GBP, due to its provenance #Cyprus pic.twitter.com/FzMZVoQY1B

Back in 1988, George Vassiliou, the then President of the Republic of Cyprus, offered this 2,700-year-old vase to Margaret Thatcher, the then British Prime Minister.
Vassiliou had requested special permission from the Department of the country’s antiquities to offer this gift, as otherwise, the vase would not be permitted to leave the island.
Androulla Vassiliou, the wife of President Vassiliou and a former EU Commissioner said on Twitter that her husband ”will be very disappointed.”
Vassiliou noted that the vase was offered to Thatcher as a state gift and not as a private gift.
Besides, British officials are not allowed to privately own state gifts worth more than 140 British pounds, unless they pay for themselves to obtain the gift.
Christie’s sold the vase for 6,000 pounds in May, and the revelation made by Paphiti has sparked negative reactions across Cyprus.

I am sure my husband will be very disappointed. After Mrs Thatcher ceased to be PM, this ancient pottery which was a gift to the PM of the UK, should have found its place at 10, Downing street. It should certainly not be sold by her heirs. It was not a personal gift. https://t.co/7SWQogZWLH

”After Mrs. Thatcher ceased to be PM, this ancient pottery which was a gift to the PM of the UK, should have found its place at 10, Downing Street. It should certainly not be sold by her heirs. It was not a personal gift,” Androulla Vassiliou said in her tweet.
Christie’s sold more than 200 objects related to Baroness Thatcher last May, and somehow, the Cypriot vase ended up in her collection.
Now Cyprus is expected to seek an official explanation from the British government about how and why this ancient artifact was sold by Christie’s, instead of staying at 10 Downing Street
For this reason, Cyprus’ Foreign Minister is expected to raise the issue with the British High Commissioner on the island’s capital, Nicosia.