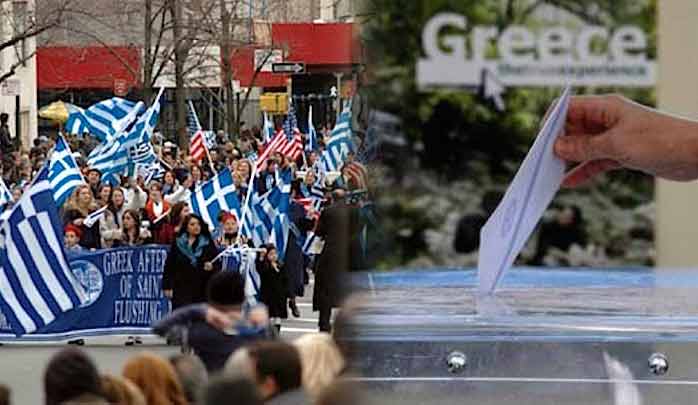 Greek political parties seemingly reached a consensus on Tuesday regarding the parameters of proposed legislation which will allow Greek expatriates to vote from their country of residence.
However, the bureaucratic obstacles envisaged cast doubt on the sincerity of Greek politicians of engaging the Diaspora in the country’s politics.
The inter-party committee agreed that Greeks abroad can vote through the nation’s embassies and consulates throughout the world. But those eligible to vote must have resided in Greece for at least two in the last 30 years.
Working in Greece, studying at Greek schools and fulfilling the obligations of military duty are some of the ways a two-year residency can be proven. Greek voters will also need to have a Greek tax identification number (AFM).
Τhe proposal would prohibit those living outside Greece for more than 30 years from voting from their country of residence, raising questions of democratic parity.
In addition, it would be difficult and time consuming for many Greeks living abroad to prove they resided in the country for two years. All those who have experienced Greece’s notorious bureaucracy can attest to the labyrinthine procedures and the paper trail state authorities require — even for simple transactions.
Many Greeks abroad who are on the electoral rolls may decide that it would be easier to fly to Greece to cast their vote where the additional documents will not be required, instead of chasing paperwork to prove they have spent two years in Greece.
An obvious solution to the problem would have been for Greek embassies and consulates to certify that a person is on the election roll by checking their identity on election day.
In addition, since the option of a postal vote has been shelved, many Greeks abroad would have to travel enormous distances to cast their votes. In many cases, this would mean that it is more convenient or even cheaper to fly to the homeland than to the nearest embassy or consulate.
The authorities could have designated churches, schools and other Greek-owned buildings in smaller towns where there is no diplomatic representation as polling stations.
The conservative New Democracy government had championed the cause of giving Greeks abroad the right to vote from their country of residence.
However as it has only 158 votes in the 300-member Parliament, it needs a super-majority of 200, or at least 42 votes from the outstanding 142; its bitter rival, the former ruling SYRIZA Party, holds 86.