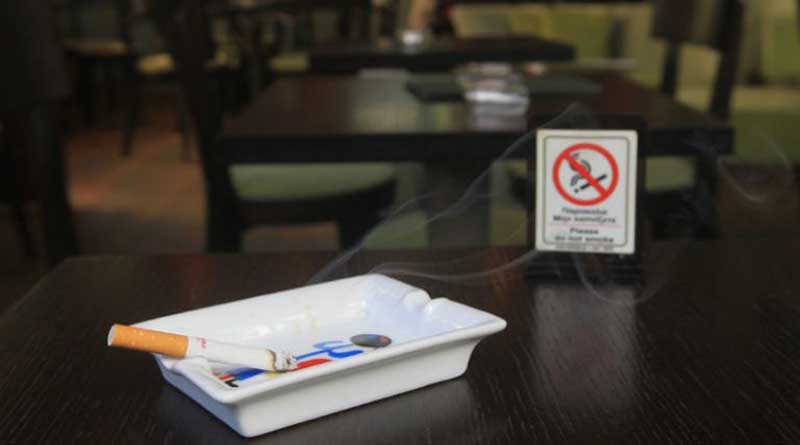 A majority of Greek lawmakers on Tuesday voted in favor of the new anti-smoking bill – the third such legislation passed in Greece in the last decade.
The new law includes stricter penalties and is tougher on those who smoke in public places. It comes at a time when, according to a new survey released earlier in the week, the number of adults who smoke has declined from 40 percent to 27.5 percent in the last ten years.
Greece’s first bill banning smoking in public places passed way back in 2009, but was never enforced in reality. Greeks continued to smoke openly in public places – as some still do – and the initial efforts made to implement the ban were perfunctory and did not last long.
The new bill is a great deal tougher, with the government asking police to help inspectors enforce the law, but the measure has still met with resistance from police forces.
As of October 16, 2019, smoking is not only prohibited in all public indoor areas in Greece, but also in playgrounds and other open-air areas which are frequented by children. Additionally, smoking in a private vehicle with a child under 12 inside it is prohibited.
The smoking ban now applies to taxis, hospitals and other health care facilities, schools and universities, restaurants, coffee shops, live music venues, and nightclubs. The new legislation also bans smoking in sports arenas and open-air stadiums.
The new bill also abolishes an article which exempted large entertainment venues and restaurants which had designated smoking sections which were closed off from the rest of the establishment.
Fines will also be stiffer, at 50 to 500 euros for smokers violating the ban and at 500 to 10,000 euros for the managers or owners of the businesses or establishments where the anti-smoking law is violated.
After five such violations, the establishment’s license to operate will be revoked.
Those who sell tobacco products to minors will now be fined 500 to 10,000 euros, and their license will be revoked after five offenses as well.
Those who smoke in a private vehicle with a child under 12 inside will be fined 1,500 euros. If the vehicle is public, the fine goes up to 3,000 euros. In all cases, the driver’s license of the vehicle’s owner will be suspended for one month.
New Survey Finds Fewer Greeks Smoking
Greek citizens appear to be growing more aware of the great risks associated with smoking, according to a study published earlier in the week which found that the number of adults who smoke has declined from 40 percent to 27.5 percent in the last decade.
Conducted by the American College of Greece’s Public Health Institute in conjunction with the Hellenic Cancer Society and presented on Tuesday, the survey found that 17.9 percent of smokers do so on a daily basis, but 9.6 percent smoke less than seven cigarettes a week.
Age is also an important factor in the practice, as the number of regular smokers in the 18-24 age group amounted to just 7.9 percent, rising to 9.9 percent in the 25-34 group and 26.1 percent among 45-50-year-olds.
Are Greeks really willing to stop smoking in public places?
As most Greeks say, the country has more laws than it needs, but very few of them are enforced. And when it comes to smoking, nicotine addiction prevents most smokers from complying with the law.
Greek smokers also continue to use the excuse of their individual “rights” for not complying to the smoking ban, although study after study has clearly shown the hazards of second-hand smoke.
According to a Eurobarometer study from 2017, 72 percent of licensed establishments in Greece are restaurants which allow smoking — the highest figure anywhere in the European Union.
The same study found that 37 percent of Greeks were smokers, compared to an EU average of 26 percent.
This means that, just two years ago, about one in three Greeks routinely smoked. And of course, what is worse is that that one smoker violates the rights of the other two to breathe clean air.
Proprietors of bars, restaurants and coffee shops are afraid to prohibit smoking in their establishments for fear that they might lose their customers who smoke. The recent economic crisis has also been used as an excuse by such businesses.
And they would take the risk of flouting the law in order to keep their smoking customers.
Smoking where it is prohibited is also seen as an act of defiance by a number of Greeks who refuse to follow the rule of law. Some seem to believe anti-smoking laws are dictated by the European Union and they refuse to comply with the dictates of Brussels.
And as some Greeks say, the woes of the economic crisis “call for a cigarette.”
Another factor which encourages Greek smokers to continue is the low prices of cigarettes compared to the rest of Europe. When in most countries cigarettes cost twice as much, in Greece they have remained relatively cheap.
And while those in charge raise taxes on everything else, tobacco taxes have remained relatively low.
But there’s more to it than all those factors. Despite the ban on cigarette advertising, Greek films and television series still show their actors smoking, they seem to enjoy the experience. Smoking is still routinely presented as being “cool.”

In the past ten years since Greece’s very first anti-smoking bill, governments have proven themselves afraid to tackle the sensitive issue of smoking in public. Like bar and coffee shop owners, government leaders were afraid to boldly enforce the law because they were afraid of losing voters.
Many Greeks still view the ban on smoking in a bar or a taverna as dictatorial.
After ten years of failing to enforce the anti-smoking laws already on the books, it is a challenge for Prime Minister Kyriakos Mitsotakis and his New Democracy government to finally resolve this taboo issue. But it looks like this is on the horizon now.
Maybe two out of three Greeks should thank him for that.