What Might Turkish Offensive in Syria Mean for Greece? 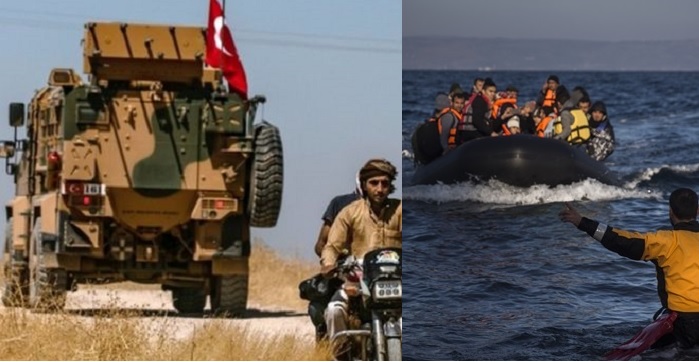 The agreement between the United States and Turkey allowing the Turkish Army to advance in northern Syria and create a safety zone to supposedly host approximately two million refugees has Athens worried.
Turkish President Tayyip Erdogan claims his army would create a 30-km (19-mile) wide zone inside Syria to fight the remnants of ISIS jihadists. By securing that zone, Turkey will also be able to relocate 2 million out of the 3.6 million refugees the country is currently housing on its own territory.
However, there is already a force there fighting ISIS. The YPG Kurdish fighters have been battling the jihadists for years in the area, and they have lost a total of 11,000 fighters in the war against ISIS.
But Turkey has branded the Kurdish fighters as “terrorists.” So this begs the question, what will happen when the Turkish troops enter the area with a license to kill?
Turkish Foreign Minister Mevlut Cavusoglu has already stated that Turkey will clean northern Syria of terrorists, without specifying which exact terrorists he is referring to.
The reasons Greece is nervous about this situation are multifold. First, it seems that US President Donald Trump has given his Turkish counterpart the license to invade Syria and operate all the way to the Euphrates River. That would mean that Trump is making Erdogan a valuable strategic ally in the war against ISIS.
This seems to give the already out-of-control Turkish president more clout in the sensitive Eastern Mediterranean region.
Subsequently, Erdogan can use this license as the ticket to parade his military prowess in other areas as well, such as in the Aegean, the Eastern Mediterranean and Cyprus. The Turkish president has already raised issues about Greece’s sovereignty in the Aegean and Cyprus’ exclusive economic zone.
Also, and more importantly, there is the question of whether Turkey will allow additional migrants to leave its coasts for Greece. Erdogan has often used the refugees his country accommodates as a negotiating tool, or as a means to blackmail Europe.
Given the recent support by the US, he may allow new waves of migrants to set sail for the Greek islands, while he is relocating Syrian refugees in northern Syria.
Greek migration services estimate that currently, about 75 percent of asylum seekers coming from Turkey are not actually refugees but economic migrants from Asia and Africa.
At the same time, there is always the possibility that, if indeed the Turkish army does attack ISIS jihadists, many of them will mix with the refugees and make their way to Greece.
The Greek islands which are neighbors to Turkey are literally flooded with migrants and asylum seekers, with hundreds arriving each day. The government plans to transfer them to the mainland have been insufficient so far due to the large numbers which continue to arrive.
More arrivals would make a terrible situation even worse.
With the new powers given to him by the White House, the unpredictable Erdogan seems to be the key player in the Eastern Mediterranean.
It should be noted that there were strong reactions in the US after Trump decided to pull American troops out of Syria and give Turkey the green light to enter Syria in their place. Both Democrat and Republican congressmen have disagreed with the president’s decision.
Despite reassurances given by US Secretary of State Mike Pompeo during his visit to Athens last week, it seems that Ankara has unofficially been given a new, heightened role in the region.
Apparently, Washington believes that, geopolitically, Turkey is more important than Greece and Cyprus. And this is why the White House has “forgiven” Ankara’s purchase of the Russian S-400 missile system.
This seemingly preferential treatment of Turkey is making the Greek government nervous. And the residents of the islands of the northeastern Aegean who bear the brunt of the migrant influx are even more so.