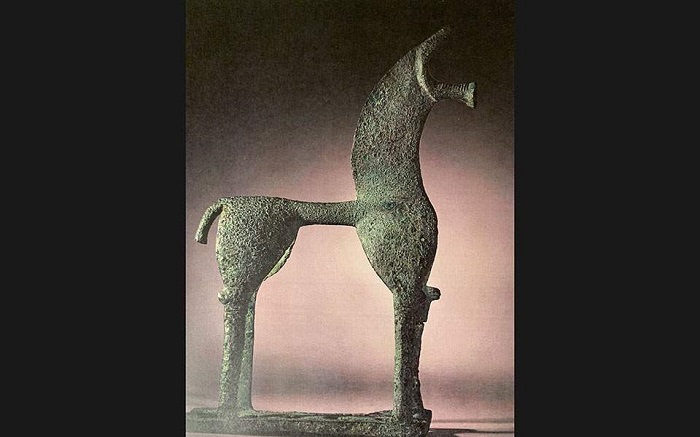 Greek Minister of Culture and Sports Lina Mendoni met on Monday with a New York City assistant prosecutor over the repatriation of an 8th century BC bronze statuette which was illegally exported from Greek territory.
The Greek minister met with Matthew Bogdanos, Assistant Prosecutor and the head of the Office for the Illicit Trafficking of Antiquities and his associates at the New York City Prosecutor’s Office.
Mendoni presented a number of issues that the Ministry has been working on to claim and repatriate antiquities, which have been identified in collections in the United States.
Mendoni outlined to the assistant prosecutor the history of the legal assertion of ownership of an 8th century BC artifact which was originally illegally removed from Greece.
The bronze horse figurine was about to be auctioned by Sotheby’s in New York on May 14, 2018, along with other items from the Howard and Saretta Barnet Collection, with an estimated opening bid between $150,000 and $250,000.
Regarding the origin of the figurine, the auction house noted the order of succession of the ancient artifact, as they understand it. The statuette was first auctioned off by Münzen und Medaillen AG in Basel, Switzerland, on May 6, 1967. British rancher Robin Symes then most likely acquired it at the auction.
Howard and Saretta Barnet then purchased the bronze from Robin Symes on November 16, 1973 and held it in their collections until their deaths.
It should be noted that Robin Symes is a now-disgraced British antiquities dealer who was unmasked as a key player in an international criminal network which traded in looted archaeological treasures, along with his long-term partner Christo Michaelides.
On May 4, 2018, the Ministry of Culture and Sports requested Interpol to investigate all documents pertaining the acquisition of the figurine, with emphasis on the documents relating to its first auction in 1967, in order to determine the time and the manner in which  it was exported from Greece.
However, the investigation proved fruitless after half a century of auctions — and the destruction of the Swiss auction firm’s documents. The Ministry demanded its return from its current owners, the heirs of Howard and Saretta Barnet, but also from Sotheby’s, which was about to auction off the bronze horse on behalf of the Barnet heirs.
In an unprecedented move, a Ministry statement related, the Barnet heirs and Sotheby’s filed a lawsuit against the Greek state itself, seeking a court decision recognizing the Barnet family as the statuette’s legal owners.
According to them, the Greek State cannot have property rights over the object, and they demanded that Sotheby’s should be allowed to divest the figurine on behalf of the Barnet family.
The Greek Ministry sent a formal letter to the auction house requesting the withdrawal of the bronze statuette from the auction due to the lack of legal export documents from Greek territory. They also demanded to know the present location of a photograph of the object,  once in the photo archive of Symes-Michaelides, which was confiscated in Greece in 2006.
Furthermore, the Greek Ministry also called for the cooperation of the auction house in the repatriation of the figurine as an “ancient moveable monument,” which belongs exclusively to the Greek state, in accordance with Greek law and international conventions.
Sotheby’s withdrew the bronze figurine on the eve of the auction and sent a letter to the Greek Ministry of Culture saying that the Greek state’s request had created a “cloud of controversy” over the object and affected its commercial value.
In the same letter, the auction house requested specific information on the date and manner of its export from the country, within very strict time limits, which made it impossible for the Greek state to comply since there had to be an official translation of the documents in support of the Greek position.
The auction house and the Barnet heirs filed a lawsuit against the Greek state in the  Southern District Court of New York. On June 21, 2019, the court rejected the Greek side’s request because of the lack of jurisdiction of the US court to hear a case involving the nation of Greece itself.
The Ministry of Culture, in cooperation with the Legal Council of the Hellenic State, then hired an attorney to defend the interests of the Greek side.
Greece’s point is that, according to Greek archaeological law, ancient moveable monuments are the exclusive property of the Greek state, and cannot be private property, nor can they be subject to any kind of transaction.
The Greek Minister told the assistant prosecutor that the legal action against Greece is unprecedented. This is the first time that a lawsuit has ever been filed against a government, as countries usually turn to courts to claim ancient artifacts from auctions, private collectors, and museums.
The owners of stolen property and auction houses cannot claim objects belonging to a country’s cultural heritage.
For this reason, the legal claims to the bronze horse have many dimensions, and clearly the appeal of this case will not only concern Greece’s claim. The Greek Culture Ministry’s statement concludes with the words: “Antiquities can not be equated with works of art. The antiquities are intertwined with the history and cultural heritage of the peoples.”