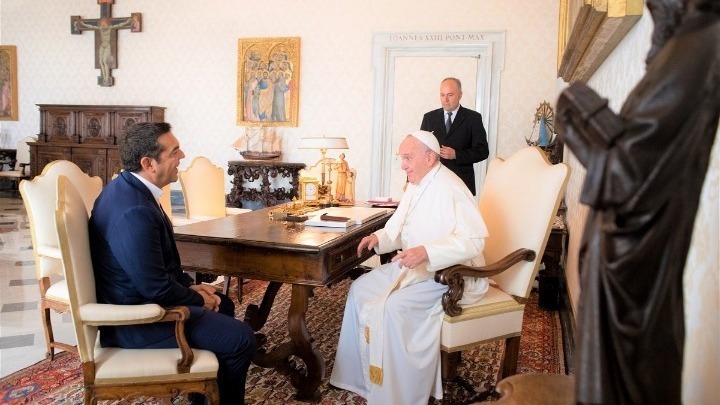 President of main opposition party SYRIZA and former prime minister Alexis Tsipras had a one-hour meeting with Pope Francis at the Vatican on Saturday.
According to SYRIZA sources, Tsipras thanked the Pontiff for his efforts to raise international awareness on the refugee humanitarian crisis, for his support towards Greece expressed during his visit to the refugee facilities at Lesvos island, and for his kind words to Greeks.
The Pontiff told Tsipras that what he saw at Lesvos ‘has been deeply engraved in the memory and soul’ together with Tsipras’s phrase, which the Pope said he often recalls, how “human rights are more important than any agreements.”
Pope Francis expressed his steadfast support for the Greek people and, as he said, the pro-humanitarian attitude Tsipras displays on any given day, and once again congratulated the former prime minister for his efforts.
Both Pope and Tsipras referred to a rise in regional conflicts, global inequalities and poverty. Pope Francis congratulated Tsipras on improving the economic situation in Greece and especially on addressing its social repercussions.
Referring to his recent trip to Skopje, the Pope described the leaders of Greece and North Macedonia as ‘brave’, regarding the signing of the Prespes Agreement, and stressed how it significantly promoted peace and stability in the region, and that it was worth the political cost.
They also discussed the importance of tackling climate change and the Pontifical joint initiatives with Patriarch Bartholomew towards that effect.
Finally, Alexis Tsipras referred to how, as he said, both the Left and Christianity share ‘a common ground’ of values and fundamental principles of Christianity and thanked the Pontiff for the social nature of his messages for the protection of the weak and social justice.
SYRIZA President Alexis Tsipras posted a message on his Twitter account, where he again thanked Pope Francis “wholeheartedly for his support of Greece in his effort to address the refugee crisis with humanity,” and for his “message on social justice and the protection of the most vulnerable to austerity policies,” as well as “on his stance for peace and cooperation in the Balkans, which he proclaimed from Skopje on occasion of the Prespes Agreement,” Tsipras wrote.
Source: AMNA