The Island of Santorini Now in Urgent Need of Sustainable Tourism 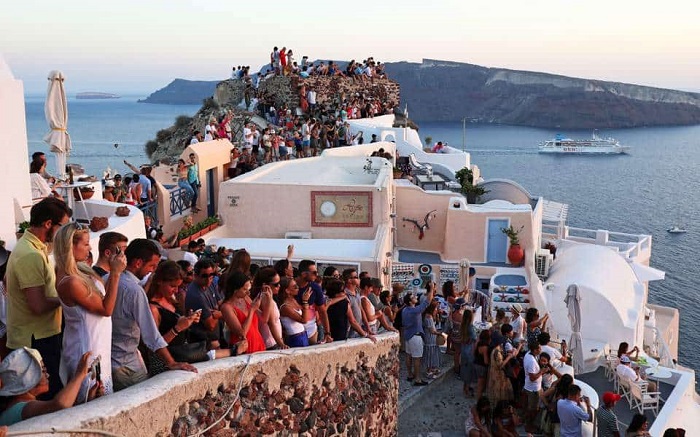 “Bringing companies, consumers, and communities together is our best chance to protect destinations and ecosystems for future generations.” – Prince Harry, Duke of Sussex

By Phil Butler
Early in 2019, the European Parliament’s Transport Committee blasted Greek authorities for allowing tourism on Santorini to reach a point of complete saturation. The island, undeniably one of the world’s most iconic destinations, has still not addressed these issues and now appears to be undergoing a kind of character suicide.
The uncontrolled tourism influx to the island is now now tearing at the social and cultural fabric of what is truly one of the great wonders of the world.
Santorini’s Almost Unstoppable Flood of Tourists
A journalist friend of mine from Moscow on vacation in Crete, returned recently to the island after a day trip to Santorini. Curious as to how she and her husband’s side trip had gone, I asked Ramilya Gilyazova, who works as a television producer at Channel 360 in Moscow, about their Santorini experience.
I was more than a little astonished when she replied, “It was great except for having to look straight up to see things.” Of course, she meant that the island was so crowded that catching an unobstructed view of any of its wonders proves difficult.
This was not what I expected to hear from someone who lives and works in one of the world’s busiest cities. Ramilya’s honest review cued me to dig deeper into the overall situation of tourism saturation on Santorini.
The day after my Russian friend’s revelation, I called my good friend Rebecca Skevaki, one of Europe’s most successful boutique tour providers, to get an insider’s viewpoint.


Rebecca is the founder of Grecian Lux, the owner of Crete Urban Adventures, and the manager at Urban Adventures Santorini, so I knew she’d be intimately familiar with Santorini tourism in the “now.”
Her assessment of the situation is best summarized as “mission-critical.” Shevaki says “The soul of the island is also obscured when there are too many visitors all at once.”
She went on to suggest Santorini as a potential case study of stakeholders to begin to deal with the overall popularity of Greece itself as a destination. The tourism executive stated that the idea of extending the season to even out tourism flows may actually not be all that wise, and that this could even result in exacerbating the problem.
This view supports the theory of one of sustainable tourism’s most learned experts, Dr. Godfrey Baldacchino, the UNESCO co-Chair in Island Studies & Sustainability. Unfortunately, what Dr. Baldacchino had to tell me was not uplifting.
From Bad to Worse
To be honest, I was taken aback at first by the learned professor’s replies to my initial questions. I expected him to somehow have a systematic and authoritative plan in place for rescuing Santorini and other such tourism hotspots.
Baldacchino, who was elected the Chair of the Scientific Board of RETI, the global network of island universities, broke down the Santorini situation like this.
“Santorini thrives on tourism, period. Unless there is a different scope for investment, employment, etc., so as to promote diversification, then there is precious little one can do. Tourism is the octopus whose tentacles are everywhere on the island,” he explained.
If I may paraphrase his comments, Baldacchino says it would literally take a natural disaster to reverse Santorini’s current unsustainability.
In my past profession as a public relations executive, it was my job to act as an intermediary between hotels and the media. So when I approached associates at tourism-oriented businesses on Santorini, I fully expected to discover ongoing and vibrant efforts to get a handle on this burgeoning problem.
Out of fairness, I’ll not mention those businesses here. I will, however, speak about the bitterness of these stakeholders’ attitudes regarding Santorini being crushed under the feet of millions of tourists.
They simply don’t give a damn.
Not one I contacted even so much as bothered to issue a statement on this pressing issue. Furthermore, their PR entities dragged their feet for two weeks, which in turn held up my reporting here. It’s exactly as Dr. Baldacchino warned us.
Until Santorini’s volcano, Thera, erupts again, profit rules the business — and even the politics — of tourism. Business here in Greece, and to a certain extent elsewhere as well, is a frantic competition to squeeze every ounce of short-term profit out of tourists. End of story.
Meanwhile, Santorini mayor Nikos Zorzos spoke to the media recently about the strain on island infrastructure when he announced the daily arrival limit for tourists this year. The water consumption situation is now growing critical.
New buildings and unforeseen urban problems now stain the Cycladic culture for which the island is so famous. And the rapid expansion of Airbnb rentals provides still more supply to an already-foreboding demand situation.
Even more disturbing are the new project proposals on the drawing board for the island. But Santorini, as suggested, is only a microcosm for the much larger sustainability question in world tourism. Sadly, the island seems to be a lost cause unless much more awareness and cooperation is in the offing.
Princes of Sustainability
A few days ago the UKs Prince Harry announced having co-founded, with leading travel industry service providers Booking.com, Ctrip, Skyscanner, TripAdvisor and Visa, a sustainability effort called “Travalyst.” According to reports, the initiative was created to mobilize the travel industry as a catalyst for good. I covered this news with renewed enthusiasm.
Billed as the “first of its kind,” Travalyst has a real chance to leverage global businesses for the good of all. If these huge business concerns cooperate to educate, raise awareness and promote positive change, then there is hope even for places like Santorini.
I fully expect Google and some other big concerns to join in on this. Their recent “Green Maps” feature is a perfect example of how concerned travelers can be informed in order to make educated decisions for sustainable travel. But Dr. Baldacchino’s assertion that travelers will always want “more” continues to trouble me.
Something beyond ecological awareness is going to be needed. This reality is exacerbated by the fact that the World Tourism Organization estimates that tourism added a whopping $8.8 trillion to the global economy in 2018.
Professor Baldacchino directed me to some extreme measures now being taken in places such as Venice, Rome, and other major destinations.

The Path to Sustainable Tourism
Some of these destinations have instituted a host of new taxes and restrictions to mitigate the tourism saturation. However, it remains unknown if the increased fees and taxes will indeed be used to address the infrastructure issues created by the crowds, or are just another way for governments to pad their coffers.
Regardless, Venice will still not tax day visitors, and Amsterdam now levies a €9 euro tax on all ocean and river cruise passengers. The problem is that there is no cooperation or consensus among business and governmental entities, only a chaotic mix of interests.
This is where Prince Harry’s initiative, or one like it, might make a huge impact.
The solution, or rather the “path,” seems fairly clear for me. Using Travalyst as a hub of change, industry leaders and stakeholders can meet to learn and agree on best practices for the overall good.
Certainly, this is not quite as easy as it sounds, but we must start somewhere. I imagine decision makers like Rebecca Shevaki, or some as yet unnamed winery or hotel owner, agreeing to be proactive to save Santorini or Venice.
Recently, Jon Crutzner, the president of Insight Vacations and Luxury Gold, wrote into his company’s policy that they are “selective with the days of the week we are bringing guests to overcrowded destinations. Controlling visit times lessens the impact of tourism in many regions, such as Venice, Rome, and Barcelona.”
Wouldn’t it be great if Crutzner signed up to be part of Prince Harry’s effort? What if all the stakeholders and concerned citizens in tourism destinations become part of this vital discussion?
If I can be a media and travel analyst “agent of change” here, then why can’t others do the same? Concerning the high-dollar resorts and wineries which could not be bothered to address the sustainability issue, I believe that it’s time to lead, follow, or get out of the way of sustainable tourism efforts.
Phil Butler is Editor in Chief of the Argophilia Travel News