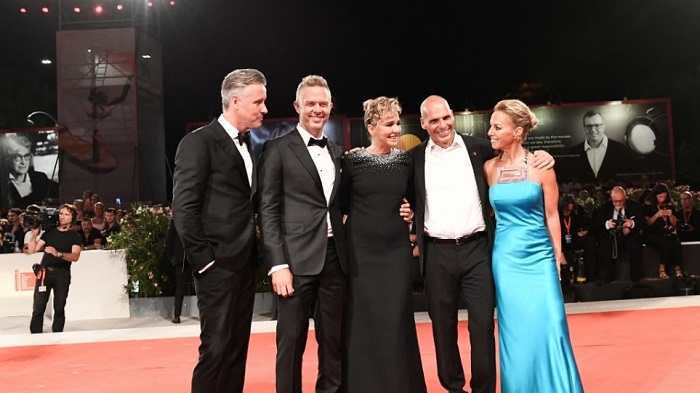 Former Greek Finance Minister Yanis Varoufakis and his wife Danae Stratou walked on the red carpet of the Venice Film Festival on Saturday for the premiere of the film “Adults in the Room” together with director Costa-Gavras and the cast of the movie.

Adapted from his eponymous book by the author himself, “Adults in the Room” allows Costa-Gravras to deliver a fascinating dive into the mysteries of the European Union, while Greece was at the very nadir of its financial crisis.

The director of “Z,”  “State of Siege,” “Missing” and so many other films which have depicted politics in cinematic form, Costa-Gavras has also staged this feature film in the manner of a thriller, where the game of politics serves as the dramatic tension of the movie.

The film received mixed reviews after its initial screening. Screen Daily says that parts of the film are “so dull, it’s actually rather fascinating.”

“It’s a flat and long-winded affair, consisting mostly of dramatised chunks of Varoufakis’ not exactly self-critical account of his attempt to bargain with the EU and its financial watchdogs over the terms of Greece’s debt repayments,” Screen Daily claims.

“Amounting as much to a hagiography of erstwhile Greek finance minister Yanis Varoufakis (solidly played by Christos Loulis) as a very long-exposure snapshot of the closed-door 2015 negotiations when Greece attempted to revisit the disastrous terms of its EU debt repayment program, the film is worthily intended, meticulously researched and very dull,” it adds.

The Hollywood Reporter, however, says that film “can be a gripping piece of infotainment” for those interested in how the EU functions in real life.

“If the Greek debt crisis were Game of Thrones, then Yanis Varoufakis would probably be its Jon Snow: an outsider brave enough to take on the powers-that-be, but perhaps too naïve and inexperienced to understand how realpolitik — both in his own country and in the tangled behemoth that is the European Union — actually works,” it says in its review.