Academics from Turkey visited museums, private collectors and universities in Trabzon, Istanbul, Greece, Ireland, Great Britain, and the US to collect information on objects that belonged to the Panagia Sumela Monastery.

According to an article by Milliyet, the scholars recorded a number of metal objects, manuscripts, and garments from the Byzantine period that they believe belong to the historic Panagia Sumela Monastery.

Among the objects, are items attributed to Alexios III the Great Komninos, who served as an Emperor of Trebizond from 1349 until his death.  The publication mentions that many of the invaluable relics were removed and exiled from the monastery by the Americans during a NATO mission in the area in the 1950s.

According to Milliyet, the list of items that have been put together by the scholars has been given to the Turkish National Assembly by the country’s Culture Minister Nuri Ersoy.

In a letter to parliament, the minister says that Sumela “is one of the most important monasteries in Anatolia” and that they are determined to bring back the 77 items recorded on the list.

The Turkish minister of culture noted that all necessary steps will be taken for the return of the heirlooms that belong to Turkish cultural heritage and were taken abroad illegally. In recent years, the Recep Tayyip Erdogan government has been keen to make use of the historic monastery, which is undergoing extensive restoration work. 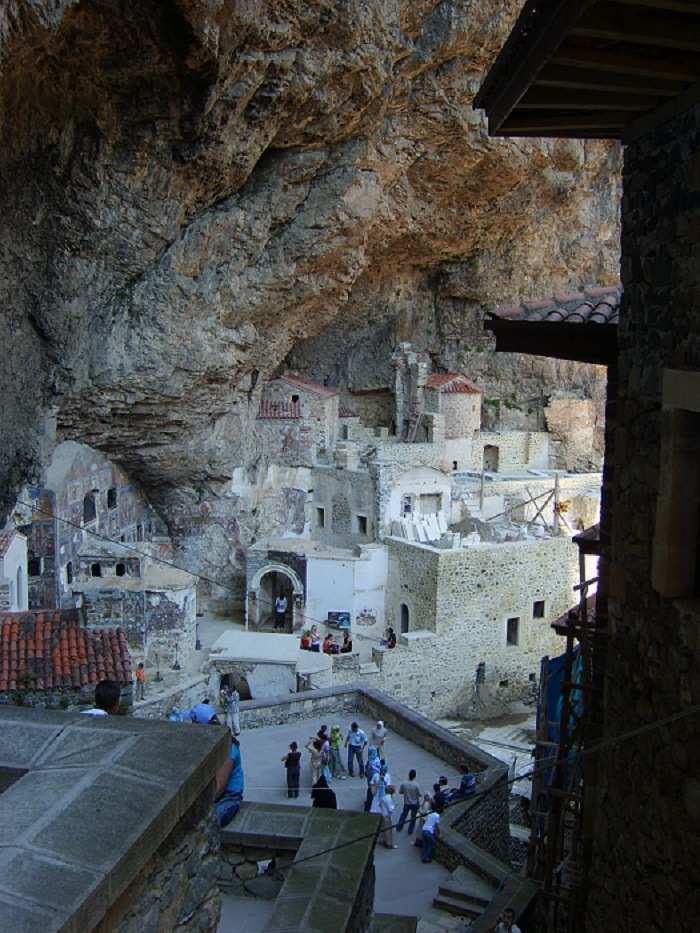 According to tradition, in 386 the Athenian monks Varnavas and Sophronius were led to the inaccessible mountain peaks of Pontus after the revelation of the Virgin Mary, in order to establish her solitary abode. There, in the cave of the steep lower slope of the mountain, at an altitude of 1063 meters, the sacred icon of the Virgin Mary of Athiniotissa was brought by angels, which was always depicted by the Evangelist Luke.

In 1922 the Turks completely destroyed the monastery.  After robbing all the precious objects from the convent, they then set it on fire.

Before the enforced exodus in 1923, the monks hid the icon of the Virgin Mary, the gospel of St. Christopher and the cross of Trabzon emperor Manuel Komninos in the chapel of St. Barbara.

In June 2010, the Turkish State allowed the Ecumenical Patriarchate to hold a divine liturgy to celebrate the Feast of the Assumption on August 15, 2010, in the Panagia Sumela Monastery.  It was the first time in 88 years that the monastery was reopened as a church, after having been converted into a museum in recent years.