GRNews
GreekReporter.comGreek NewsEducationLanguage School in Belgium on a Mission to Change Misconceptions About Greek... 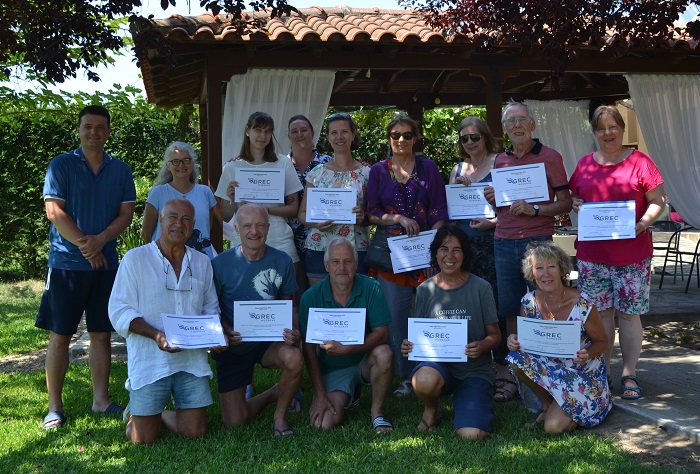 Participants in the Summer Seminar of the language school “Grec Moderne” in Halkidiki, Northern Greece, 2019

Karatzas explained to the Greek Reporter that he decided to open the school in September of 2008 after graduating with a degree in History from the University of Liege.

The educator was born in Thessaloniki, in northern Greece, to Greek parents who moved to Belgium when he was only four.

However, Karatzas never forgot his mother tongue, nor his roots in his beloved Greece. He is of course completely bilingual so he decided to put this ability to good use.

Because many have the impression that the Greek language is very difficult to learn, the school’s educators pay great attention to the specific needs of each student. They try to encourage them to overcome the difficulty of the language’s grammar and to learn the logic of the Greek language through listening comprehension, vocabulary, reading and speaking.

The Greek language school owner explained to the Greek Reporter that there are three incentives which usually cause individuals to sign up for classes.

“There are those who own property in Greece, either on an island or on the mainland, and knowing how to speak the language is of great use to them. Others are married to someone who is Greek and visit the family back home so they want to be able to communicate,” he said.

Karatzas added that “There are also individuals born in Belgium or France within mixed marriages, one parent is of Greek heritage, who want to learn the language as they travel to Greece very frequently.”

Karatzas pointed out that his school has also organized Greek language seminars during the summer in Sithonia, Halkidiki, in northern Greece, since 2016.

The participants of the seminar have the opportunity to practice what they are taught immediately, in a full-immersion setting.

They learn important information about the culture, the traditions and the long history of the Greek people and get a sense of what being Greek is all about. The language students also sometimes discuss sensitive economic and political issues as well, as part of their learning experience.

Karatzas finds it extremely important to help his students understand that “The Greeks are not lazy people that are trying to steal money from Europe; this is a misconception that many have,” he added.

The founder of “Grec Moderne” has said that “our students want us to hold seminars in other areas of Greece as well, so next year we are planning to hold one on the island of Crete.”

There are also individual, intensive, 8-day seminars, which are held in Thessaloniki, in northern Greece throughout the whole year. The seminar includes 20 hours of intensive Greek language immersion as well as a tour of the historic city.

For more information regarding Greek language classes and/or participating in one of the seminars in Greece, please visit the school’s website at:  www.grec-moderne.be