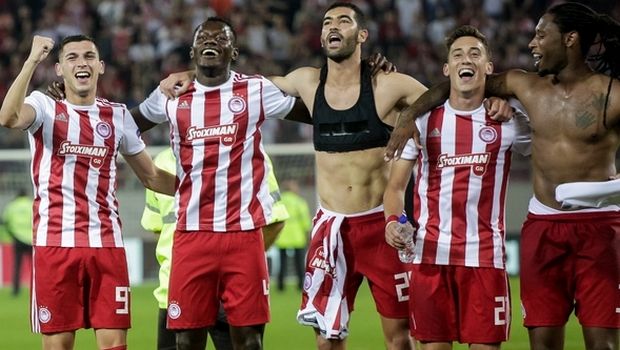 Greece’s Olympiacos practically clinched a place in the UEFA Champions League group stage after stunning Russia’s Krasnodar 4-0 at Karaiskakis Stadium in Piraeus on Wednesday night.
After a slow start with both teams trying to secure their box, it took a wise choice by Miguel Angel Guerrero to curl the ball to unlock the Russian defense in the 30th minute.
The two teams went to half-time with the fragile 1-0. In the second half the Greek club started pressing the Russians harder and had some good chances to score, as opposed to only one on Krasnodar’s part.
Then it was time for Lazar Randjelovic to shine. The Serbian winger replaced Giorgos Masouras in the 76th minute and two minutes later scored the crucial second goal.
The 22-year-old player scored again in 85′ proving to be an invaluable substitution after the brilliant idea by coach Pedro Martins.
In the 89th minute Daniel Podence’s persistence paid off. After having several misses during the game, he was vindicated as he cleverly passed the ball over Krasnodar’s goalie to end the match triumphantly.
The second leg will be held in Krasnodar on Tuesday, August 27. The winners of the qualification round will get into the UEFA Champions League group stage, while losers will enter the UEFA Europa League group stage.
In the press conference after the game the Olympiacos’ coach said that his team will  travel to Russia for the second game as if nothing is determined yet.