Dormition of Virgin Mary: When Was the Greatest Summer Celebration Established? 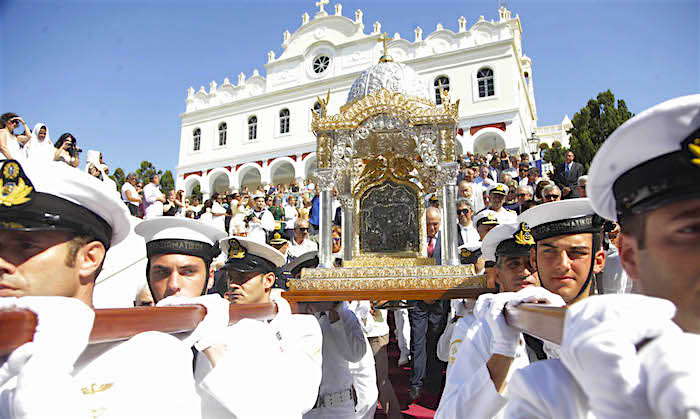 On August 15 the Greek Orthodox Church commemorates the Dormition of the Theotokos, a traditional and family-oriented feast of great significance. It is the greatest celebration established by the Greek Orthodox Church in honor of the Mother of Christ, also known as a Marian feast.
The first known records about the celebration of the Virgin Mary appear in the 5th century AD, around the time of the Third Ecumenical Council of Ephesus, which established the Virgin Mary doctrine.
The first celebration took place in Jerusalem on August 13, while later it was moved to August 15. Originally, the church did not mention the Dormition of Virgin Mary, and on that day they celebrated in honor of the Mother of Christ. The connection of this feast with the Dormition, first happened in the church of Panagia in Gethsemane, where her tomb was located.
According to the tradition of the Greek Orthodox church, the Dormition celebration is preceded by a two-week fast, referred to as the Dormition Fast, which was established in the 7th century AD. In the 10th century it was decided that the fast would take place from August 1 to August 14 and it would include fasting and abstinence from red meat, poultry, meat products, dairy products, fish, oil, and wine. In the Greek tradition, during the Fast either the Great Paraklesis (Supplicatory Canon) or the Small Paraklesis is celebrated every evening except Saturday evening and the Eves of the Transfiguration and the Dormition.
Mary’s departure from earth
The Mother of Christ was informed of her impending death by an angel three days before it happened and she was able to prepare properly. On the day of her Dormition the Apostles had not all managed to gather in Jerusalem, however, a cloud grabbed them and brought them to her. The only Apostle missing was Thomas.
The Dormition took place in the house of John the Evangelist, where she lived after Christ’s crucifixion. After her eyes closed, the Apostles carried the deathbed to the garden of Gethsemane, where she was buried.
After three days, Apostle Thomas visited her grave and found it empty. A church was built over the tomb. After its destruction, the Byzantine Emperor Marcian and his second wife Pulcheria built a new church, which still exists to this day.
The Orthodox and the Catholic church both celebrate Virgin Mary’s death on the same day, however, the Catholic church celebrate the Assumption of Mary. The Dormition and the Assumption are different names for the same event, Mary’s departure from the earth, although the beliefs are not necessarily identical.
The Orthodox church teaches that Mary died a natural death, like any human being; that her soul was received by Christ upon death and that her body was resurrected on the third day after her repose, at which time she was taken up, bodily only, into heaven. The Catholic church agrees with the Orthodox that this happened after Mary’s death, others hold that she did not experience death and she was “assumed” into heaven in bodily form, just as her son Jesus ascended.
In Greece, the Dormition is celebrated with great splendor and called the Easter of summer. Many Aegean islands –namely Tinos, Paros and Patmos – decorate an epitaph in honor of Mary. Furthermore, in many towns and villages across the country, churches dedicated to the Virgin Mary organize traditional festivals.

Since the beginning of time, people have turned their eyes to the sky and discerned the shapes of animals and objects in the stars.
Diplomacy