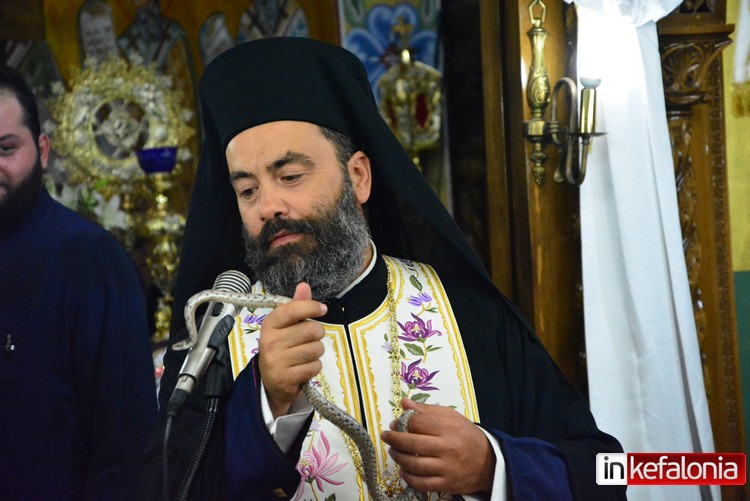 Hundreds of Greek Orthodox believers rushed once again this year to Markopoulo, in the island of Kefalonia to worship and watch the “Virgin Mary Miracle Snakes” that roam freely in and around the Panagia Fidousa Church.
Panagia Fidousa – or Virgin Mary of the snakes – is a church on the Ionian island where some snakes with miracle powers roam freely around the church, according to local lore.
Every year, during the celebration of the Feast of the Assumption of Virgin Mary, worshippers flock to the particular church where small gray snakes – not longer than one meter – appear in the church and around the icon of Panagia. Their skin is velvety and the head, like the edge of their tongue, forms a small cross.
The priest of the Holy Monastery, Konstantinos Giannikas, reports that the snakes appeared about 470 years ago, when pirate ships moored on the island and the pirates who boarded were headed to the monastery to loot it. At that time, the nuns prayed to the Virgin to protect themselves and the monastery. Legend has it that the monastery was suddenly surrounded by snakes, which forced the pirates to flee in fear. So the nuns and the monastery were saved.
The incident is considered by locals to be a miracle of the Virgin Mary. According to Ionian Islands’ deputy governor, Spyros Galatsiatos, who spoke to the Athens News Agency, “the snakes have been appearing in August every year, even inside the church. Some hang from the holy icons, the chandeliers or the stairs. Believers are not afraid of them, because they see them as a blessing.”
“On the eve of the Feast of the Assumption of Virgin Mary Assumption, after the call, the snakes appear every year on the rock that the old bell tower of the Holy Monastery was built, which collapsed in 1953 when the island was hit by the great earthquake of 7.5 Richter magnitude. Snakes appear from 23:00 until dawn. Then they disappear and reappear after a year,” a resident of Kefalonia told ANA, and they are expecting the same miracle every year.
The inexplicable fact of the appearance of these snakes, according to Kefalonia residents, has been studied by many European scientists who have visited Kefalonia, but they can not explain it, whereas until now the unknown species of snake remains unknown.
However, if one year the snakes do not appear – as in 1940 and 1953, when the island was hit by disastrous earthquakes – residents fear that some bad natural phenomenon will occur in Kefalonia.
Every year, Panagia Fidousa is visited by many pilgrims who want to see and fearlessly  touch the reptiles that are considered harmless and miraculous, as, according to the confessions of many believers, they have cured incurable illnesses with the grace of the Virgin Mary.