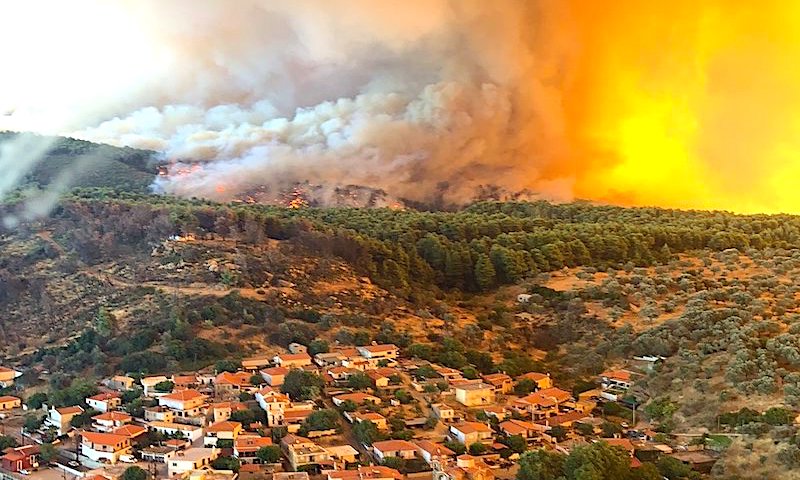 Hundreds of firefighters assisted by firefighting aircraft and water dropping helicopters  continued their battle on Wednesday against the huge fire in central Evia that has been raging on the island since Tuesday.
”We will remain in our positions until the very last bit of fire is extinguished” the Civil Protection head for Sterea Ellada perfecture, Thanassis Karakatzas, told reporters.
While most of the fire has been extinguished, there are incidents where new flames re-appear, due to the strong winds that continue to blow in the area.
Fire fighters are on constant alert and they are attempting to extinguish these new fires as soon as possible, before they spread to larger areas.
A state of emergency was declared in regions of the densely-forested island east of Athens after the blaze broke out. The wildfires were fanned by strong, almost gale-force winds and high temperatures. 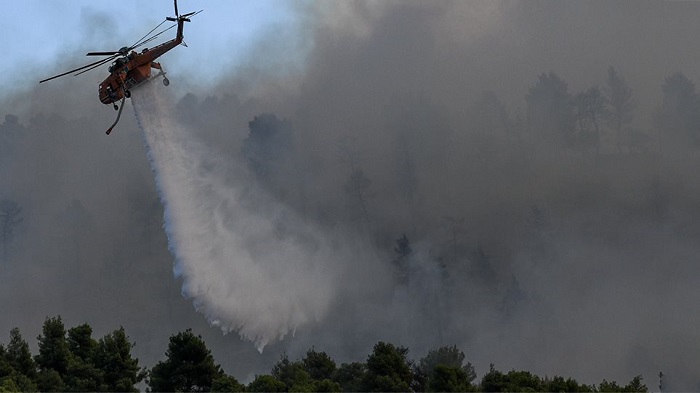 4 hours after being activated for the Evia 🇬🇷 #wildfire, our #RapidMappingTeam has delivered its “First Estimate Product” based on a @planetlabs image acquired today
Unfortunately thick smoke does not allow to perform a full delineation
A VHR acquisition is planned for tomorrow pic.twitter.com/XmTYL2GLQc

Italy sent two aircraft after an appeal for airborne firefighting equipment was sent out from the Greek authorities.
Christos Stylianides, the European Commissioner for Humanitarian Help and Crisis Management said, “We are mobilizing the rescEU assets to respond to Greece activation of the European Civil Protection Mechanism. The EU stands by Greece at this difficult time.”
Fire officials said four villages, including Makrymalli, Kondodespoti, Stavros and Platania, and hundreds of people, were evacuated as a precaution on Tuesday. According to reports, a great deal of damage has occurred in Makrymalli, where houses have burned down.
Prime Minister Kyriakos Mitsotakis interrupted his holiday on Crete to return to Athens, where he was briefed on the situation.
Related: Greece Can Learn Invaluable Lessons on Battling Wildfires