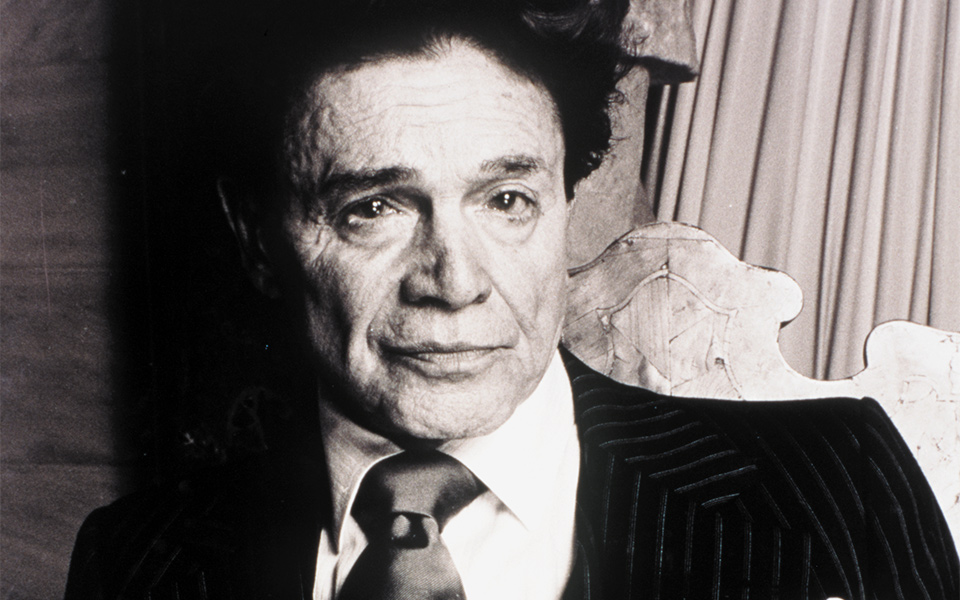 The story of Alexandros Iolas reads, appropriately, like a Greek tragedy. A man who once sat at the top of the world, in his case the world of fine art, he had a tragic demise, abetted by human pettiness and politics.
As an art collector, dealer and gallery owner, Iolas contributed to the establishment of surrealism in the United States and, to a certain extent, to the acceptance of pop art overall. His star shone the brightest of all of the Greeks in the art world globally, yet it was his fellow Greeks who turned against him in the years before his death.
Born Constantine Koutsoudis into a wealthy family in Alexandria, Egypt on March 25, 1907, he studied dance in Berlin and then Paris, where he moved in 1933 as the rise of Nazism forced him to leave Germany. He came in contact with many visual artists in the French capital, posing as a model for painter Giorgio de Chirico and photographer Herbert List.
In the mid-1930s Koutsoudis moved to New York, where he became a dancer with the George de Cuevas company. Ιn New York he met Theodora Roosevelt, a granddaughter of former US President Theodore Roosevelt, who was also a dancer. They had a brief affair, during which the young woman urged him to change his name to Alexandros Iolas because of his birthplace.
Known as Iolas now, the Greek man was forced to abandon dancing after an accident in 1944, devoting himself thereafter entirely to the collecting of artwork.
The Greek immigrant soon began socializing with personalities such as Pablo Picasso, Jean Cocteau, Giorgio de Chirico, Georges Braque, Man Ray, Rene Magritte and Max Ernst. His good looks and vibrant personality made him very popular in art circles.
Iolas then became the director of the Hugo Gallery, founded in 1944 by Robert Rothschild, Elizabeth Arden and Maria dei Principi Ruspoli Hugo, where Andy Warhol had his first solo exhibition in 1952.


He founded the Jackson-Iolas Gallery in 1955 with former dancer Brooks Jackson, and later opened and operated a chain of art galleries under his own name in New York, Paris, Milan,  Rome, Geneva, Madrid and Athens.
In his galleries, Iolas represented important artists, such as Andy Warhol, Rene Magritte, Roberto Matta, Ed Ruscha, Yves Klein, Jannis Kounellis, Takis, Victor Brauner, and Niki de Saint-Phalle. His flamboyant personality made him very likeable among art buyers and he became a prominent member in the art world as well as the international jet set.
At the same time, Iolas also promoted important Greek artists abroad, including Costas Tsoklis, Nikos Hadjikyriakos-Ghikas, Yannis Tsarouchis, Giorgios Gounaropoulos, Takis and others, some of them becoming well-established overseas.
The famous Iolas villa in Agia Paraskevi
In the 1960s he began returning to Greece often, at the same time considering the creation of a museum for modern Greek art there. This was when the jet-setting art dealer began building his famous villa in the Athens suburb of Agia Paraskevi.
This turned out to be a palace of 18,300 square feet in which he planned to house his priceless collection of art and antiquities.
His dream to make a museum of Greek contemporary art never materialized; however, Iolas sparked the founding of the Macedonian Museum of Contemporary Art in Thessaloniki, to which he donated a large number of art works from his collection.
When the collector finally completed his mansion in Agia Paraskevi, he brought over and installed his huge collection of antiquities, as well as Byzantine and modern art. His vast collections also included tapestries, furniture and other objects of great artistic and monetary value. 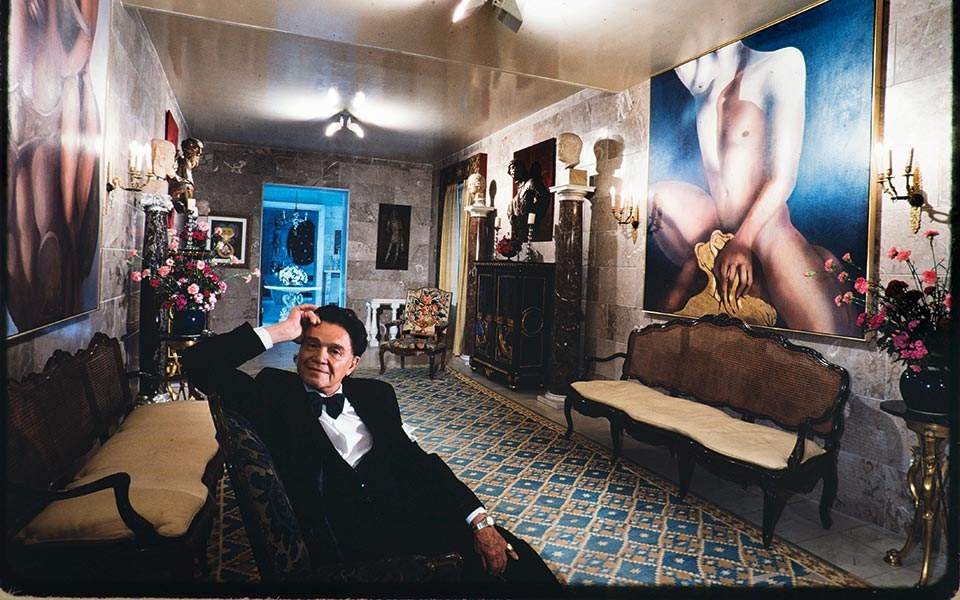 Marble walls, golden doors, ancient columns from Ravenna and as many as 10,000 works of art and antiquities of almost incalculable value decorated Iolas’ villa. Iolas clearly never intended  for the villa to be simply his home, but a museum that would house his works and people from the art world.
This is why there were rooms in the villa dedicated to special themes, such as the “Byzantine Culture Room,” “Andy Warhol’s Room,” and others.
“One room in Iolas’ palace houses more masterpieces than the Athens National Gallery”, wrote one reporter from the French newspaper Liberation after his visit to the Agia Paraskevi mansion.
Iolas’ valuable art collection included works by Pablo Picasso, Salvador Dali, Giorgio de Chirico, Henri Matisse, Max Ernst and others, as well as notable works by Greek artists.
The villa all these treasures were housed in was more like a palace. Designed by famous architects and decorated by artists, it became the place where famous dinners and parties took place, with the guests always prominent members of the art world, the international jet set, politicians, writers, and fashion designers.
His tragic fall and ruin
The parties Iolas held at his estate soon became the stuff of legend. At the same time, however, they were targeted by the yellow press, particularly the tabloid paper Avriani. The daily paper began a ruthless attack against Iolas, criticizing his sexual preferences – he was openly gay – and his many excesses.
This all began in 1983, after the art collector gave an interview to Woman magazine in which he badmouthed his friends, from Yannis Tsarouchis to Melina Merkouri, as well as figures from the entire political sphere and art world in Greece.
Those in power never forgave him for this indiscretion. Especially the press.

By that time, PASOK had been in power in Greece for two years, and the nation had changed, with Andreas Papandreou’s socialist rhetoric prevailing. Avriani, the tabloid which backed PASOK and its leader, found a convenient scapegoat in Iolas.
He was rich, eccentric and homosexual, things that did not go well with the new, socialist Greece the newspaper was propagating. And the fact that he was friends with former prime minister Constantine Karamanlis did not help either.
Slanderous reports on Iolas in Avriani portrayed him as an antiquities smuggler, a drug user, and even as a pedophile. Soon many Greeks chose to view the eccentric art collector in a different light than they had previously, and he eventually became persona non grata in society.
Iolas could not fight back, and as his biographer Nikos Stathoulis wrote, the unfair war against him contributed to his demise. He died of AIDS on June 8, 1987.
After his death, his sister Niki Stifel and his deceased brother’s daughter, Eleni Koutsoudi-Iola, became the heirs to his estate. The women tried to sell the entire estate to a developer, but the Ministry of Culture put a stop to their plan, as the villa was marked a site of Greek cultural heritage.
But ironically, even after that declaration, Iolas’ wish to turn his collection into a museum was still never acted upon by the Greek government. As a result, the priceless collection was looted piece by piece, and the villa has been the sad victim of vandals throughout the years.

However, the famous villa was recently acquired by Agia Paraskevi Municipality, which has plans to restore it and house works of modern Greek art in it once again, in cooperation with the Partnership Agreement for the Development Framework (ESPA).
Watch the documentary below to see the mansion in all its glory and how it appears today.
https://www.youtube.com/watch?v=5zxsu-Oyvd4&t=3007s

Greek PM Mitsotakis vowed to strengthen the national health system during a meeting on the epidemiological situation in Attica and the rest of the country.
Greek News