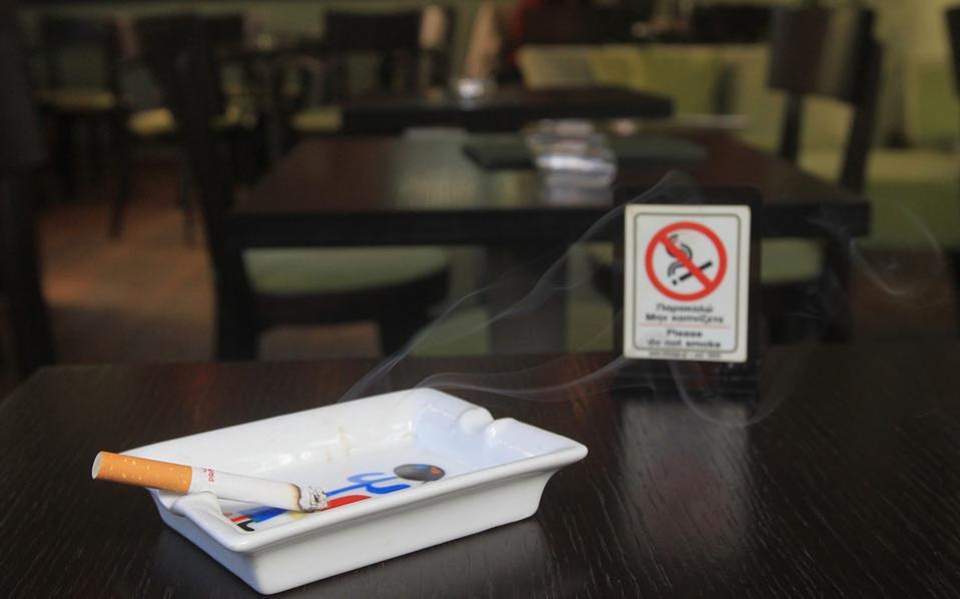 One of the pre-election pledges of Greece’s new Prime Minister Kyriakos Mitsotakis was that his administration would enforce the anti-smoking laws already in existence in Greece. The nation’s first legislation concerning the curbing of smoking went into effect on July 1st, 2009, exactly one decade ago.
The law has been enforced so sporadically and in such a perfunctory way since then that it was effectively not enforced at all. Signs were indeed placed in all enclosed public spaces and businesses, but they were only for show.
Greeks continued their longstanding tradition of smoking, especially in bars, cafes and restaurants, as if the bill had never existed.
When the law was drafted back in 2008, 40 percent of Greeks were regular smokers, a statistic which put Greece in second place in the percentage of smoking citizens among all the EU member states.
The economic crisis forced many Greeks to quit the expensive habit of smoking. By 2014, the percentage of smokers in Greece had dropped to 27, with the nation still maintaining second place in the percentage of smokers in the EU.
In actual numbers, 15,000 Greek citizens die each year from smoking-related illnesses, according to the Hellenic Thoracic Society. Experts say that 70 percent of these deaths could have been prevented if more importance had been given to smoking prevention efforts.
Surprisingly, Greece spends only 1.3 percent of  its available health funds on such prevention methods.
Exacerbating the problem, many Greeks mocked anti-smoking laws at best. Many smokers fought fiercely against them. They viewed the bills as an effort of the Greek state to rob them of what they considered their right to smoke.
For many Greeks, smoking is seen as their God-given right, and no government can interfere with that.
The economic crisis ended up creating an extra argument in their favor, which can be summed up by the feeling that “I have my financial woes that you forced on me as a State — at least let me enjoy my cigarettes.”
So it is not unusual to still see people smoke in public places across the nation. In fact, it was – and still is – the norm. Even doctors once smoked in hospitals in Greece – some still do – and it was never unusual for citizens to see employees of ministries and government agencies enjoy a cigarette in their offices.
In bars, cafes and restaurants the clouds of smoke make one think that it is still 2008 and that the anti-smoking laws had never been enacted.
If we are to accept the stereotype that Greeks are carefree and difficult to control, to stop them from smoking in closed public places seems next to impossible, as they see it as a basic right. To  actually put some muscle behind the anti-smoking laws and enforce them certainly entails political cost.
It’s not surprising that no governments after 2009 dared touch the issue.
To the contrary, the Syriza government of Alexis Tsipras effectively took the “right to smoke” to the extreme. With most ministers and MPs coming from a background in which disobedience to authority is applauded, the previous government never dared to touch this third rail of the issue of smoking.
Former Greek Deputy Health Minister Pavlos Polakis was even seen smoking during a public conference at one point during the previous administration. Minister of Infrastructure and Transport Christos Spirtzis was seen smoking in a conference in Trikala — sitting next to the mayor who is responsible for making Trikala the only city in Greece where smoking is truly prohibited!
Only last week, Rena Dourou, the outgoing regional governor of Attica who belongs to the Syriza, mocked the anti-smoking law by posting on social media an old photograph of iconic former Culture Minister Melina Merkouri enjoying a cigarette. Astoundingly, the former governor appeared to be unaware that Merkouri had died of lung cancer.
As difficult as it is for nicotine addicts to quit smoking, it is equally hard for a government to enforce the existing anti-smoking laws. It requires a government with  a strong political will to act with determination, casting aside concerns about the risk of political costs. After all, the majority of Greeks are now non-smokers.

It's #WorldNoTobaccoDay today, and Greece – in 2017- still cannot enforce its antismoking law! This member of the Greek parliament said it all; on the reality of smoking, and the reality of a country that cannot enforce it's own laws even on the people who voted for them. Share this video and learn more about the anti-smoking campaign by the Behrakis Foundation here: https://goo.gl/GYA6WM