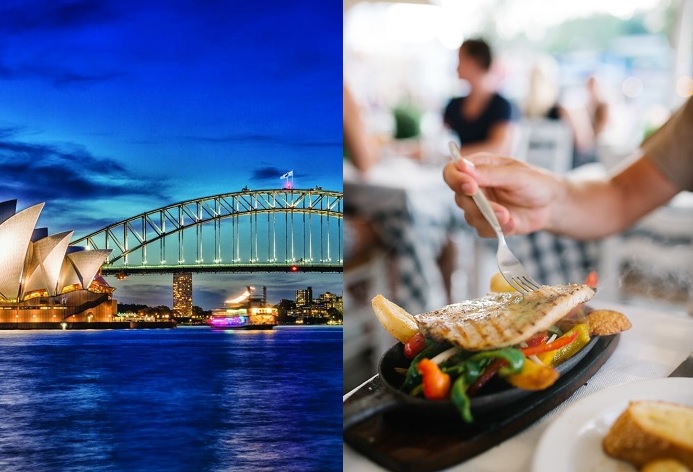 Due to the economic crisis that has plagued Greece, a large number of Greeks migrated to find a better future. One of the main beneficiaries of this wave of migration is the city of Sydney, ranking Australia as one of the main destinations for the Greek community.

Australia hosts one of the biggest Greek communities in the world, with 93,740 born in Greece and 397,431 people with Greek ancestry, according to the 2016 census conducted by the Australian Bureau of Statistics.

It’s no coincidence that Greek restaurants have consequently boomed at the same time. Greeks brought with them their culinary skills that are used to help run these eateries.

For this reason, we have compiled a list of the top 10 Greek restaurants in Sydney, Australia, according to TripAdvisor, a travel and restaurant company that displays restaurant and hotel reviews.

The story of Medusa starts with the family’s love of traditional Greek cooking combined with fresh farm ingredients and recipes. This was the ideology that Peter Koutsopoulos used to create his restaurant, bringing Greek cuisine traditions of 40 years ago to Parramatta, Australia. Peter’s desire for his Mama’s traditional flavors made him go back to Greece to rediscover them and bring them back to Sydney to create Medusa.

Providing high quality traditional Greek dining since 1952, Diethnes is a family restaurant that has maintained its famous reputation in Sydney. Besides sharing a wide variety of food, the ‘Diethnes experience’ includes immersing yourself in the Greek warm atmosphere that the restaurant provides, by experiencing the true meaning of ‘kefi’ (fun) and having the feeling that you are sitting by the seaside of a Greek island.

The Apollo is located in Potts Point, that combines the professional success and heritage of Jonathan Barthelmess. The eatery has flavors of the Mediterranean, including both outdoor and banquette seatings, and a chef’s table besides the kitchen that has an elegant minimalist decoration, mirroring the simple and dusty Greek landscape.

At Apollo, Jonathan has been getting in touch with his roots; he cooks Greek food by developing his personal unique blend of innovation and tradition.

In ancient Greece, citizens gathered at the ‘agora’ (meeting place). Jan and Marek wanted this concept to be the foundation of their restaurant, a place where people can meet to eat and drink. Set in a sophisticated and relaxed atmosphere on Glebe Point Road, Agora brings a big selection of traditional Mediterranean and Greek dishes re-exploring them with modern techniques.

Alpha restaurant is all about hospitality, generosity, and shared feasts – which is what Greek cooking has always been about. Since its opening in the late 1950’s, Alpha combines traditional and modern Greek cooking. Touches of culinary techniques re-owned by the chef Peter Conistis include seasonal, rustic dishes, cooked in the restaurant’s wood-fired oven.

The restaurant first opened as a meeting place for migrants, businesses, and shopkeepers and a place for Greek culture to be discovered.

The year of 1821 was when the Greeks decided to free themselves from the Ottoman Empire by starting the War of Independence.

Jim Kospetas’s restaurant reflects the passion and love he has for his Greek roots. His vision for 1821 is “Made in Greece” and that is why his restaurant consists of 100% Greek ideas, decoration, design, and materials.

Started in 2010, on the lower ground floor of the GPO building at No.1 Martin Place, Subterranean Greek Grill & Bar includes a variety of authentic Greek food, desserts, and BBQ grill.

The underground casual tavern-style dining room has an open kitchen in the center stage and sandstone walls that have been there for 100 years, making it a memorable place to visit.

Founded in 2009, the tavern’s aim is to present traditional Greek food for everyone to savor. It is served with Greek hospitality and has an authentic yet modern Greek setting, that makes you feel as if you are dining in Greece.

Located at Bayswater Road, Potts Point, Greek Eats – Plateia Where Friends Meet, is a cozy restaurant where you can either spend time catching up with your friends and family or read a book while devouring delicious Greek food. Some of its best sellers include Mixed Grill and Vegetarian or Gyros Pita. The restaurant also delivers to your home.

The family restaurant offers a warm environment accompanied with modern Greek dining that radiates a homely charm. They use fresh local ingredients along with good quality Greek wines. Go and enjoy a relaxed homely atmosphere at the Seed Greek Kouzina.