US Ambassador to Greece: Politicians Come and Go, But Ties Remain Strong 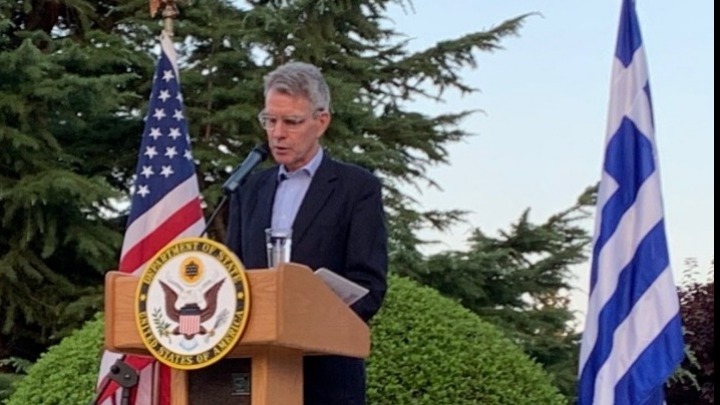 U.S. Ambassador to Greece, Geoffrey Pyatt, underlined that the U.S. and Greece are steadfastly dedicated to deepening their bilateral relations
While speaking at a reception to mark the 4th of July held on Monday evening in Thessaloniki, Pyatt said that “last month I was in Washington and I had the pleasure to see that the stock of the U.S.-Greece relationship is higher than ever.
“There is a broad consensus in Washington that Greece has become one of the most reliable and important regional allies,” added that US envoy.
He noted the momentum generated in the Greek-U.S. relationship by the Thessaloniki International Trade Fair (TIF) in September 2018, where the U.S. was the honored country.
“The politicians and diplomats come and go,” said Pyatt, “but what we have built will remain: A strong tradition of cooperation, friendship and common ideals that go back to the establishment of our modern states”.
Pyatt referred to a series of energy projects in the region, such as the Trans-Adriatic Pipeline (TAP) and the recent start of construction for the Interconnector Greece-Bulgaria (IGB) natural gas pipeline, underlining that “Northern Greece is becoming a crucial crossroads for energy security and diversification, a place for long-term investments.”
On his part, US Consul to Thessaloniki, Gregory Pfleger, in his address focused on the “thousands of bonds” that unite Greece and the USA, which he learned about during his time in Thessaloniki.
“As I have heard said many times, we can’t build our future if we don’t understand our past…weaving together the stories of our common past, helps us to build our common future that is developing positively at this time”.
Source: AMNA