GRNews
GreekReporter.comAustraliaArchbishop Makarios Enthroned as Head of the Greek Orthodox Archdiocese of Australia 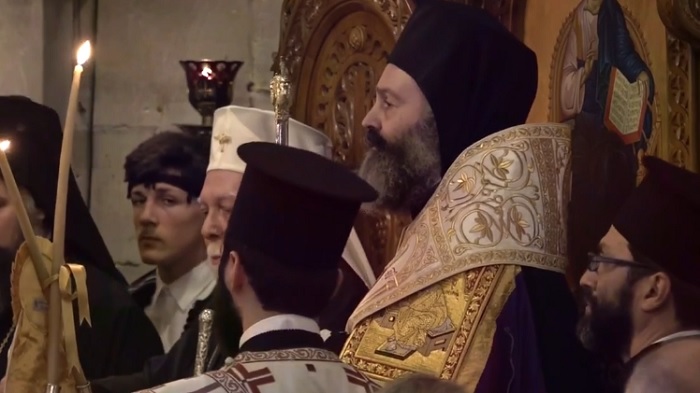 Hundreds of faithful, the hierarchy of the Australian Orthodox church and politicians gathered on Saturday in Sydney to attend the enthronement ceremony for Makarios, the new Archbishop of Australia.

The ceremony followed by a liturgy took place at the Holy Cathedral of the Annunciation of the Theotokos.

Makarios on Saturday became the sixth Archbishop of the Greek Orthodox Archdiocese of Australia.

Archbishop Makarios of Australia (Griniezakis), was born in Heraklion of Crete in 1973. He completed his elementary studies in his birthplace and at the Rizareios Ecclesiastical School of Athens.

Since 2003 he has been teaching at the Patriarchal Academy of Crete. In tandem, he has served as a visiting Professor to various Universities, amongst which are the Theological College of Holy Cross in Boston, the University of Tartu and the Medical Schools of the Universities of Crete, Thessaly and Athens. In May 2015, he was elected the first Dean of the Department of Orthodox Studies of the Autonomous Church of Estonia.

He became a monk and Deacon in 1993, a Presbyter in 1997 and an Archimandrite in 1998 at the Holy Monastery of Saint George Epanosifi, whilst on Easter Sunday of 2008, Ecumenical Patriarch Bartholomew bestowed upon him the office of Archimandrite of the Ecumenical Throne.

On 9th May 2019, the Holy and Sacred Synod of the Ecumenical Patriarchate, following the favorable commendation of Ecumenical Patriarch Bartholomew, having appreciated his theological and secular education, his literary contribution, his administrative charisma and his ecclesiastical ethos as the hitherto Bishop Makarios of Christoupolis, elected him unanimously Archbishop of the Holy Archdiocese of Australia.