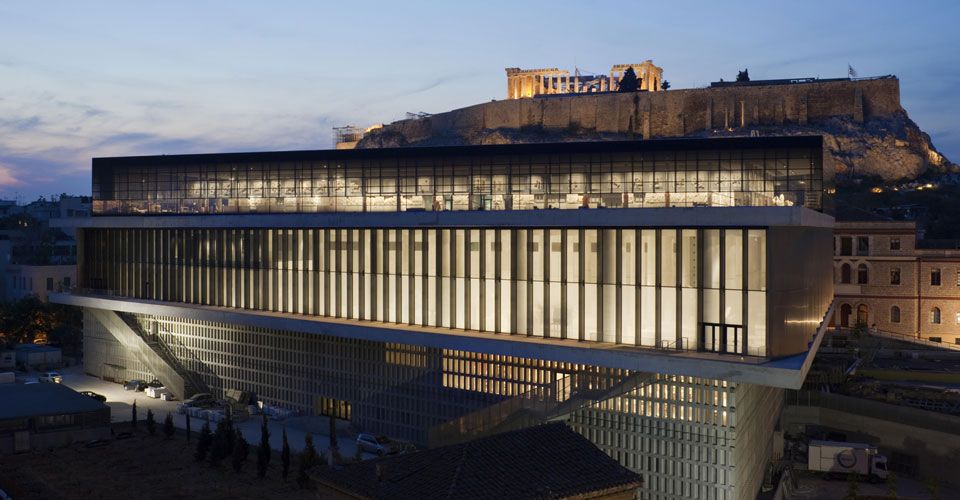 The new Acropolis Museum, which first opened its doors on June 20, 2009 is considered one of the greatest museums in the world. This is not only in terms of its exhibits, all from the nearby Acropolis, where western civilization was born, but also because of its location and brilliant architecture.
Adjoining the iconic Acropolis Hill, known as the “Sacred Rock” in Athens, the new Acropolis Museum perfectly complements the historical site, making a visit to both a true lifetime experience.
With its foundations laid in 2003 and building completed in 2009, the Acropolis Museum is the work of Swiss architect Bernard Tschumi. Its striking design has attracted worldwide praise.
“It is very contextual and powerfully respectful of the urban fabric of Athens while doing a dance around the ruins,” the American Institute of Architects Honor Award Jury wrote in 2011.


History of the Acropolis Museum
The history of the museum which would hold the priceless treasures of the Sacred Hill began in 1833, when the Ottoman military presence had been withdrawn from the Acropolis and the modern Greek state was in its infancy.
Talks were initiated during that year about building a museum on the historic hill of the Acropolis.
The monuments of the Acropolis had suffered through great disasters and even several incidents of deliberate destruction throughout the ages. In 1687, the Venetian army ruthlessly bombarded the Acropolis, which then served as the military base of the Ottoman rulers of the city.
The bombs of Francesco Morosini, the Doge of Venice, destroyed the southern part of the Parthenon, while the Ottomans dismantled marble sections of the monuments to build fortifications.
After the birth of the new Greek state, tourists visiting Acropolis Hill were known to take away pieces of the priceless marble as souvenirs, making the construction of an Acropolis museum imperative.
It was decided in 1863 to build the museum on a site southeast of the Parthenon, and the foundations were laid for the building on December 30, 1865. The design of the museum provided that the height of the building should not exceed the height of the pillars of the Parthenon.
While some considered the removal of the archaeological treasures an insult to the Acropolis, others considered it sacrosanct to construct a modern building near the hill.

The museum building was completed in 1874, on the southeast side of the Parthenon. The building was only 800 square meters (8,611 square feet), which soon proved to be inadequate to house the findings of the great excavations of the Acropolis that began in 1886.
The construction of a second museum, the “Small Museum,” was announced in 1888 and was built east of the existing museum.
During World War II, many of the Acropolis exhibits were stored in the basements of the National Archaeological Museum and even in caves in nearby hills, only to return after the war. The Small Museum was demolished in 1953 and new chambers were built in the original museum.
The first halls of the newly-renovated museum were opened to the public in 1956 and the remodeling was completed in 1964. The remains of the Mycenaean wall and the sanctuary of Pandion were kept in the basement in the newly-remodeled building, but they were unfortunately confined to storage spaces.
Soon, even this extended building was found to be inadequate, after archaeological authorities determined that there was no room for new artifacts which were continually being uncovered. Those who had originally envisioned the Acropolis Museum just outside the Sacred Rock had been vindicated.
The construction of a new museum was especially imperative, as Greece had begun to pursue the issue of the return of the Parthenon sculptures from the British Museum.
Prime Minister Konstantinos Karamanlis stated in 1976 that it was crucial that a new Acropolis Museum be constructed with all the necessary facilities for the preservation of the invaluable works of Greek art, including the remaining Parthenon sculptures, the Caryatids and all the antiquities stored in the warehouses of the old museum.
Design Competitions for a new Acropolis museum
The first competition for the new museum was held in 1976, but it was limited to architects from Greece. Both the 1976 competition and the one which followed in 1979 failed to produce any workable results, mainly because the sites selected for the proposed construction were deemed unsuitable.
Political arguments and harsh public criticism ensued, until finally all sides agreed that the site of the former Makrygiannis Camp was the most suitable place for erecting the new museum. 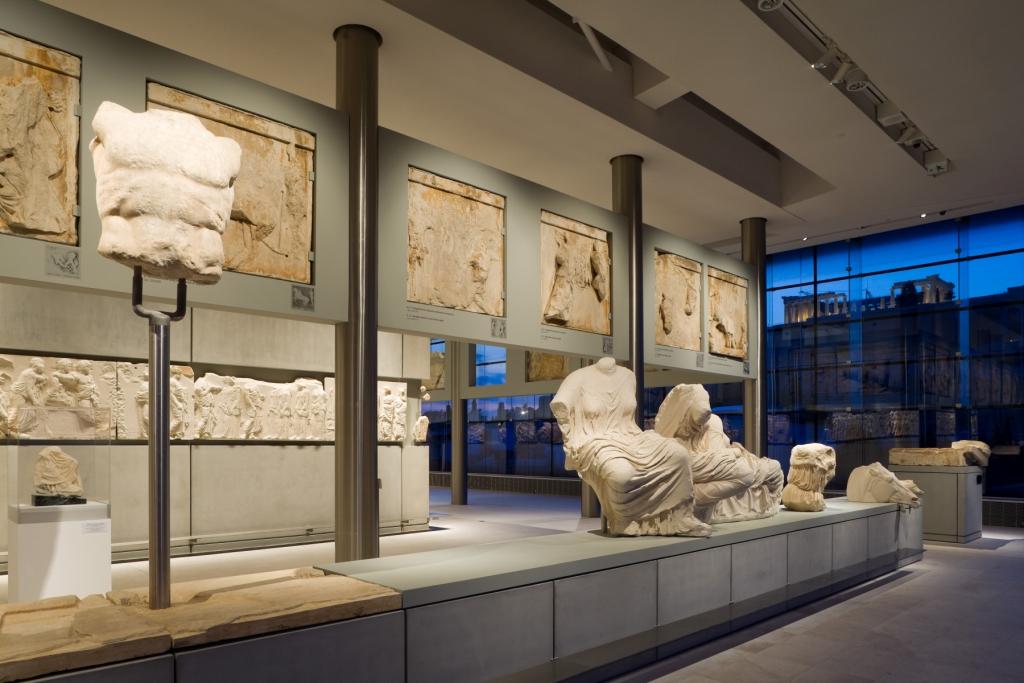 In 1989, Melina Merkouri, who as culture minister had made it a priority to demand the return of the Parthenon sculptures from the British Museum, initiated a new international architectural competition.
The results of the contest were canceled after the discovery of an ancient village on the Makrygianni site which had been inhabited from prehistoric to Byzantine times. The resulting large area of excavation had to be incorporated somehow into the new museum.
Additional classical era and Byzantine discoveries surfaced at the Makrygianni site, further delaying the plan to build the museum there. The site to lay the museum foundations was finally allocated after the completion of the excavations.
It was decided that the findings at the site had to be preserved and exhibited through the transparent floor of the first level of the museum building.
The Organization for the Construction of the New Acropolis Museum (OANMA) announced a new competition in 2000, which would be conducted in line with EU directives. This final contest was a great success, and first prize was awarded to the architects Bernard Tschumi and Michalis Fotiadis, with the collaboration of twelve architectural offices.
Construction of the new museum building began with great fanfare in 2003 and it opened to the public on June 20, 2009. The president of the museum is the honorary professor of Archeology at the Aristotle University of Thessaloniki, Dimitrios Pantermalis. 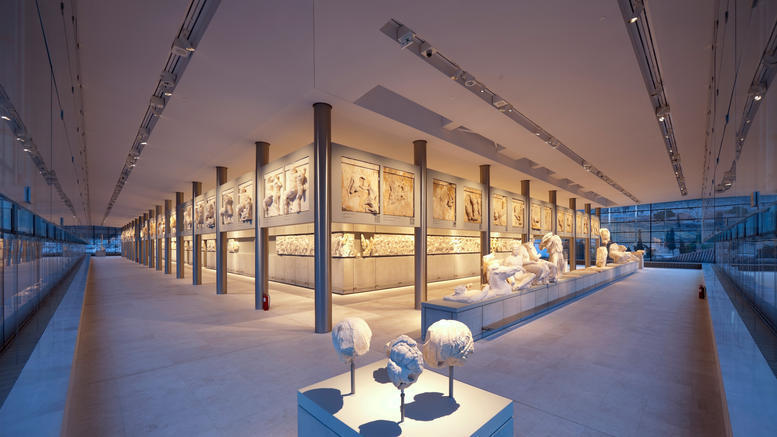 The New Acropolis Museum
The Museum is located on the southern slope of the Acropolis, on the site of the former Makrygianni Camp, just 280 meters (919 feet) from the Parthenon. The main entrance of the building is located on Dionysiou Areopagiti Street, which is near Makryigianni, Chatzichristou and Mitsaiou Streets.
With a total area of ​​25,000 square meters (2,690,978 square feet), the Acropolis Museum has 14,000 square meters of exhibition space, which is ten times larger than the old museum. The building is made of steel, glass and cement, and perfectly uses natural light to highlight the 4,000 exhibits discovered on the Acropolis and all around the hill.
The exhibits displayed there cover many eras of human history, from the Mycenaean era to the Roman and Early Christian period. 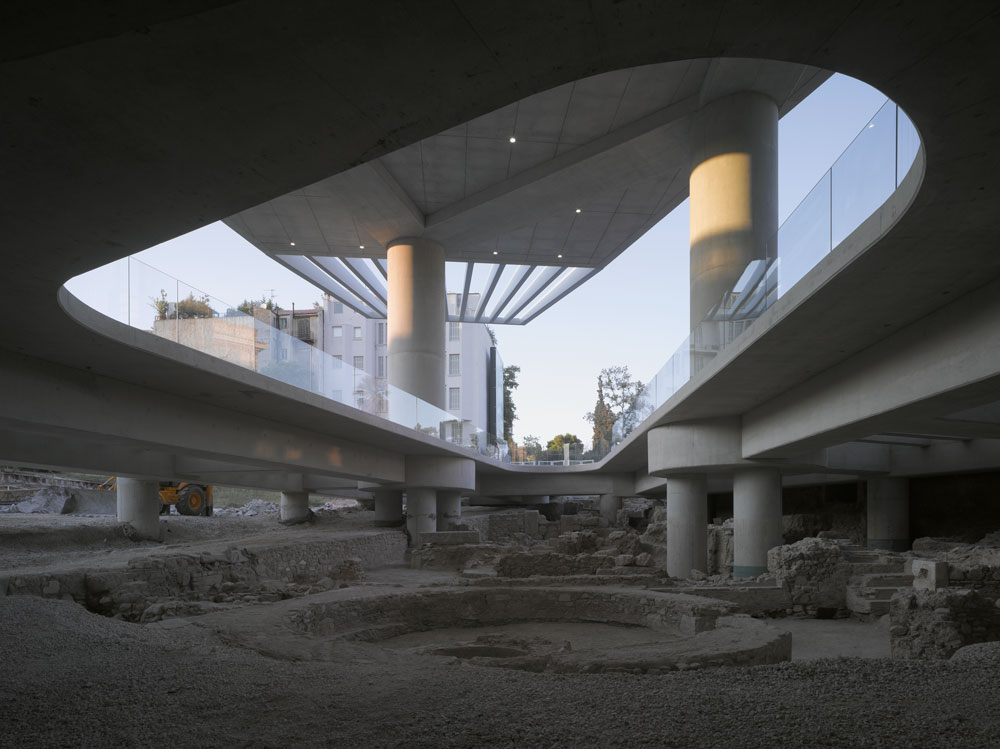 The top floor (Parthenon Hall) mirrors the dimensions and the orientation of the Parthenon, while it is turned at a 23-degree angle compared to the rest of the building so that visitors have a direct visual contact with the timeless monument across from the museum.
Of all its many priceless exhibits, the museum highlights are considered to be the Parthenon frieze, the Caryatids of the Erechtheion and the famous sculptures of the Archaic period and the Golden Age of Pericles.
Great emphasis is placed on serving visitors to the Museum by developing specific reception areas, including a foyer, an auditorium and a temporary exhibitions hall, shops, and a restaurant.
Everything a visitor needs to know about the iconic monument and the antiquities found on and around the hill is presented via many different media. The museum also has a 200-seat amphitheater, a virtual reality room, a hall for high-ranking officials and a display area for temporary exhibitions.