Sixty-eight small bronze memorial plaques were placed at the entrance of the First High School for Boys in Thessaloniki last week, in the final act of commemoration of 149 young victims of the Nazis. The name, date of birth and cause of death for each of its Jewish students who were sent to the Auschwitz death camp is engraved of one hundred and forty three of the plaques.
The first eighty one plaques were put in place in September of 2015. Engraved on the largest plaque are the words: “Students from all grades from the First High School for Boys in Thessaloniki. They stopped being students on April 8, 1943. One hundred and forty-three were killed in concentration camps, six survived.” 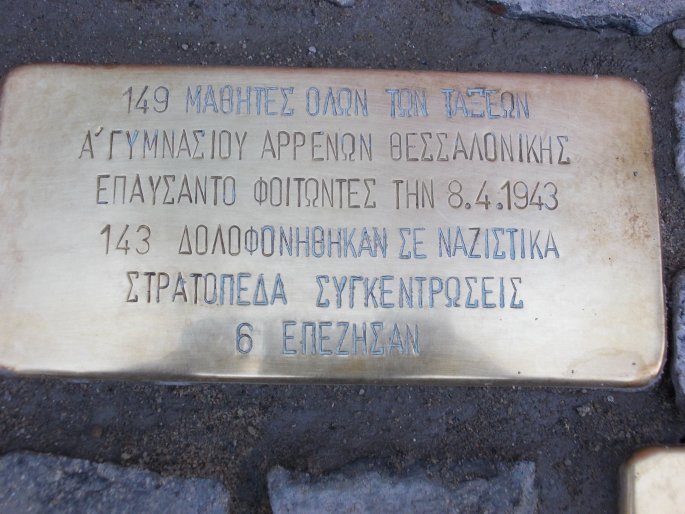 Of the six schoolboys who survived, who are also commemorated on the plaques, four migrated to the U.S. and the other two returned home to Thessaloniki.
The formal commemoration of the atrocity which befell the boys during WWII began when businessman Apostolos Dereklis and two of his classmates became curious to find out what had happened to the Jewish children who had attended their school.
“We assumed that the number would not exceed 4-5 students. However, looking at files and school records, we found that 143 students were killed, and only six survived from Auschwitz. We conducted a thorough investigation by cross-checking all the data with state records, and this is what we found,” explained Dereklis, according to ethnos.gr.
Their initial shock was quickly replaced by an intense desire — which became a need — to preserve the memory of these children.
The businessmen chose to do this by the installation of plaques, often seen in Germany, called “stolpersteine.” This is a unique type of small bronze memorial plaque, the work of the German artist Gunter Demnig, who in this way contributes to keeping alive the memory of the victims of the Holocaust.
The unveiling ceremony for the new plaques took place on Saturday, June 1 in the presence of the German Ambassador to Greece Walter Stechel, and the President of the Jewish Community in Thessaloniki David Saltiel, along with Demnig and Dereklis.
“Everyone who passes and walks on these plaques will wonder what they mean. Every passerby will stand and think about what has happened. It is a very positive move. It helps keep the memory alive,” Saltiel told interviewers from ethnos.gr during the unveiling ceremony. 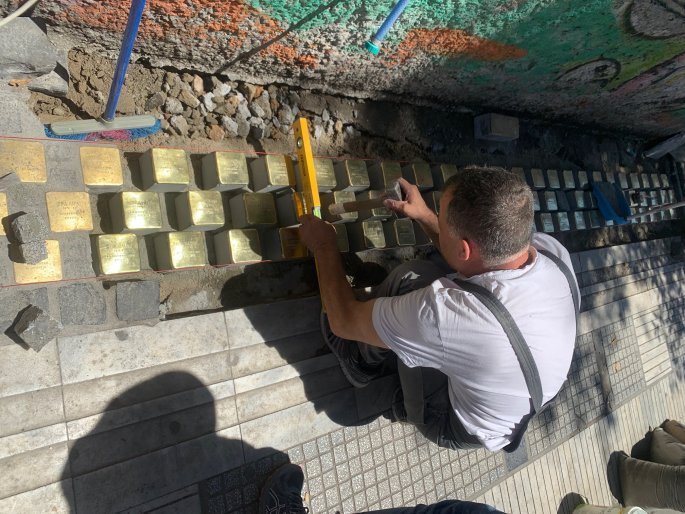 Dereklis, who has lived in Germany for decades, believes that keeping alive the collective memory of those lost is the highest duty of those who survived the war.
He also made sure that a bronze ribbon was also placed in the area of Votsi in Kalamaria in remembrance of the fire that was started 76 years ago, on June 29, 1931, with the intent of exterminating the Jewish community living in the Kambel neighborhood.
Another bronze ribbon was placed in the center of the city of Thessaloniki, where Nazi headquarters were located during the Occupation.