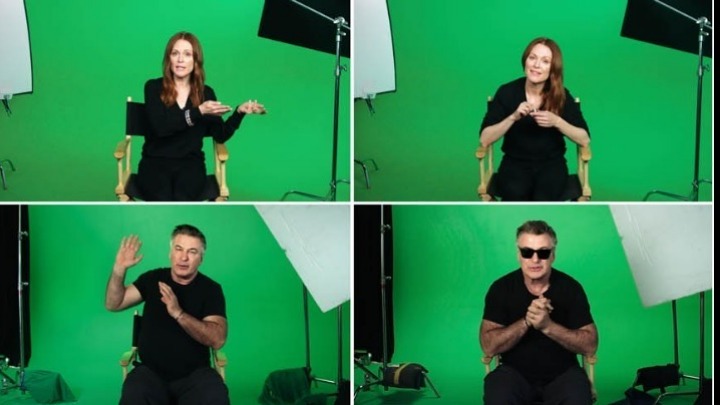 Julianne Moore and Alec Baldwin re-enact the interviews of six anonymous refugees and their sufferings in a new video installation by South African artist Candice Breitz, who explores the reaction of audiences to real suffering, compared to their reactions to celebrities.
The installation, titled “Love Story,” opened on Thursday, inaugurating the Athens Festival.
The seven-channel video installation juxtaposes the firsthand accounts of refugees’ experiences with the universal allure of celebrities, according to a description provided by the Athens Festival, which is part of the annual Greek Festival.
In the first section of the exhibit, a seven-channel installation will allow visitors to “watch an accessible ‘drama’ performed by two Hollywood stars, Julianne Moore and Alec Baldwin, re-enacting excerpts from the initial interviews of six refugees.
The Festival goes on to explain that “The fast-paced montage strips the intimate testimonies of their depth, complexity and nuances, turning them into a facile, mainstream product meant for popular consumption.”
In the second section, viewers can watch the original, uncut interview footage of refugees and migrants, “including the shocking story of 23-year-old Sarah Mardini from Syria. In 2015, Mardini crossed the sea between Turkey and Lesbos, saving eighteen of her fellow Syrians from drowning,” it says.
The exhibit’s description notes that “The next year, she returned to Lesvos to aid activist groups, and last year she was arrested and charged with refugee smuggling, an arrest that was met with international reactions.”
The exhibition will be open until June 30, 2019.
Source: AMNA